Lisa Cummins, Danny Walsh, and myself tackled the 24 miles in 24 hours swim challenge this weekend past, as I briefly mentioned last week.

Mark Robson alerted us to this UK charity swim back in January/February. I thought it sounded like fun and asked a few of my regular swim friends and the rest of the Magnificent Seven if anyone was interested for the past weekend.

I had chosen Kilkenny’s Watershed pool back in February and the manager Aoife Mullins was immediately receptive and positive. The Watershed is only open about two years and is a beautiful FINA approved 25m pool (and fantastic sports centre) which has UV water processing.

We met at 9am on Saturday. Aoife had given us use of a First Aid room off the deck for the day and allocated a lane for the four of us (on their busiest day of the week) and we had discussed chlorine levels and water temperature previously. Aoife had posters up around and one staff member (Robin) had (unknown to us) even been on the local radio with our names and the challenge.

The use of the First Aid room was fantastic, given the huge amount of food and gear we all had.
People used to club and pool swimmers are always shocked when they see the amount of stuff required for a really long swim. We had circulated a list amongst us based on the experience of all the long pool swims the Magnificent Seven especially did last year and all our Channel swims, so everyone was well prepared, as you saw from my preparation list last week. We were able to get away from the deck and eat in peace. We also all made a point a showering off the chlorine after every session.

The pool was a lovely 29 C and the chlorine level was between 0.8 down to 0.2 overnight! (In relation to other pools, some older municipal pools might get as high as 2.5 to 3.0.)

We started at 10 am, sharing a lane for the day. After a couple of hours we noticed that Aoife had even arranged to give us a lane that was about a foot wider than the others. We had enough space that we only had one hand-clash in the entire 24 hours and that was my fault. The first few miles, despite trying to take it slow, went off at around 25 to 26 mins so we consciously dropped it a little bit to reserve energy.

Through the day Lisa and I also made a point of using a Asthma Inhaler (Ventolin Reliever, 100mg). In fact I really overused, just in case.

The day passed easily and by 7.30 pm the pool closed and we had the place to ourselves. I remember the early third mile as feeling great, as did number six.

Aoife put some music on the public system for us. Over the next few hours we discovered it was mistakenly playing a short playlist, so we heard the same few songs at the end of each hour and we all have some songs that we now particularly hate as they would be playing just before we got back into swim and would run around our heads for a mile.

The individual miles were all obviously different for everyone with us all peaking and dropping at different times. Lisa & I got shoulder twinges early on, and we were both concerned we were seeing flareups of our respective Channel injuries and took some prophylactic painkillers. But these aches abated and didn’t return for either of us. Danny (aka “hard as nails“) got a bad stitch somewhere around the eight hour mark which caused sickness and caused him to struggle intermittently from then on, though he never gave up completely.

The 12th hour saw us still feeling good, tweets and texts were exchanged occasionally with Mark in the Guildford Lido where the UK swim was progressing, with them having a cold open air night though these messages dropped on both sides as we all got tired.

We had moved our stuff to poolside at 7pm, and we were getting fed up with even the wide range of food and liquid we’d brought. After the public left we were able to spread out, each taking a lane.

I alternated between water and my homemade isotonic mix each hour, with a couple of cups of soup in the afternoon, and two cups of coffee during the night.

At around midnight or 1am, Robin arrived with freshly made porridge for us, a fantastic treat, and I can say, given how much of the stuff I’ve forced down unwillingly, the first time in my life I’ve enjoyed it and I had the single greatest jelly baby I’ve ever eaten at about 2 or 3am. 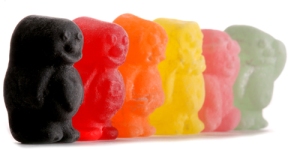 I remember mile 14 as being particularly good, as Marie and I cruised stroke for stroke very comfortably, yet mile 15 I found difficult and I started to glide like it was 1944 and I was invading Normandy, holding seven to nine metre glides of the wall for about 1000 metres until I realised it was making my neck sore and I had to revert to a normal glide.

Mile 16 was ok and I recall writing a future article for here in my head. Mile 17 was tough and mile 18 was my worst, with my times dropping to 30 mins for both 17 and 18, 18 was a real struggle as I felt strong nausea throughout and I had to concentrate strongly.

By this stage my throat and tongue were getting sore. To mile 19 I gave a theme, (relentless). On mile 20, I decided to forego my noseclip for the mile so change to my seas breathing pattern but I went back to it for afterwards. At some point in there, one mile went so well and I was so in the zone, that I forgot to stop and the girls, who were for that mile relying on me for the count, were not best pleased.

As I said each us had their own battles at our own times. The small hours were long, with tiredness and contracted muscles playing their roles. Though the rest times didn’t shrink nevertheless we felt like we had much less. Get out and shuffle to the showers. Back to deck for slowly consumed food and drink. Back to the toilet. Back to more vaseline or channel grease and putting the gear back on and to stare at the lane before getting in. Seemed like mere minutes. Pro-tip: always leaves your swim gear int he same spot so you don’t waste time looking for it.

My stroke count dropped from the initial 18 to about 20 by mile 14, reclaiming two strokes per minute on the kilometre where I was really gliding and I dropped further to 21/22 for the final hours. It’s funny how once you lose those four strokes per minutes, it’s hard to figure out where they were, because your muscles have shortened with use and you can’t extend/contract as you did previously.

But the bad phase passed, thanks possibly to a strategic Ponstan pain killer and some extra stretching and use of my tennis ball on shoulder and arm muscles.

It was all fine from there on for me, as I started to drop times on each subsequent mile again. Just minutes after the mile start at 5am we started to see the first hint of false dawn and by the time we’d finished that mile there was light through the windows. At 7.30 the Kilkenny B squad arrived for training and we were compressed back into one lane, making the second last and penultimate miles a real exercise in frustration as our mismatched speeds became more difficult. We started out last mile at 9am and were done by 9.30am, Lisa & I finishing 2 lengths apart (I had early on decided to do 25 miles to go to 40k).

Following last year’s habit set by Liam, Eddie and myself in our nine hour pool swim, butterfly finish for me FTW.

We’d done it and were feeling tired but good.

Everyone did well. Danny battled with illness, never giving up.

The standout, unsurprisingly, and she’ll of course not want me to say this, was Lisa who did it WITH NO TRAINING, displaying her phenomenal mental strength yet again! It was a privilege to swim to them all.
The after effects are ok. I have a sore ankle from all the tumble turns, Lisa & I both had sore throats. But a couple of days is all that is required for recuperation, (I did an easy 2k yesterday morning and it was fine).

Thanks once again to Aoife Mullins and all the staff of The Watershed who were so accommodating.

As long distance swimmers we are often seen as the freaks and outsiders of swimming and the best we often hope for is tolerance but this was not the case in Kilkenny where we were welcomed with open arms.

I hope I might run it again next year, when I will have more of you fighting for places, as I believe there is no better pool in the country to host it (including UL & the NAC). Start emailing me now for places! Well done to the large group in the UK who also finished, it was nice to know we weren’t the only idiots swimming early Sunday morning.

Talking to Clare later she asked me the most interesting question: “how would you rank it compared to the Channel, if you were to place the Channel as a 10”?

So, I have both a Channel double relay (25 hours, also overnight) and the solo, and Gábor’s solo to compare, I thought it was a really interesting question. I said 5 to 6 to her.

First point it that’s allocating a 10 to the Channel I know, not those who had different Channel swims. I think with even a few days I’d say no more than a 5, but you have to go with initial impressions on these things. It’s a tough challenge, but it’s nowhere near in the same category.

No cold. No tides. No horizon. No tides. No wind. No currents. No jellyfish. No tides. No diesel fumes. No vomiting. No unknown finish time or distance. The psychological difficulty is nowhere near similar. Did I mention the tides?