I had a plan for a swim last week, but I was let down again by my kayaking friend.

Friday’s forecast was pretty good. Very light onshores. I wanted something new. So I decided it was the apposite day. I had a pretty decent breakfast and was ready to go.

When I arrived at the Guillamene the tide was an hour past high and the place was buzzing with people. There was even some sun in the sky but the wind was bit friskier than forecasted, enough to catch the irregular beams of sunlight and cast them about like spotlit rhinestones in a Christmas window, putting on a showy invitational display.

The Scarf current was plainly visible, this time stretching away toward the dunes.

I put on some suntan lotion and attached a D-clip to my togs. Jimmy from the Newtown & Guillamene club told that the local fishermen said the currents where I was going were too strong, according to the local fishermen. I told him I believed the fishermen were wrong.

Onto the D-clip I attached a metre-long string with a bottle with a sachet of Go-Sport carb added (I’m out of Maxim).

I looped away on my normal outward course toward the Metalman and Great Newtown Head. The water was choppy to the front. I was already about three minutes behind normal by the time I read the Head. I swam in below the head between the rocks and Seal Rock, a three metre gap that should only really be swam in Force 2 or less.

From there I swam across toward Illaunglas, passing the rock before it. I’d allocated about 20 minutes between each waypoint so I could track my progress.

I think of Illaunglas as Cormorant Rock. It’s actually a small black reef and the rock of the coast, which is white from the guano of the cormorants and herring gulls that are always there. As I passed they took to the air over me for almost 10 minutes.

Each of the three promontories between Newtown head and Garrarus are sites of neolithic forts.

On the coast all along here but particularly on either side of Cormorant rock are very large sea caves, facing almost directly south-east and south respectively, and therefore in the high August sunlight looking like black dark ocean gates to the Land of the Aes Sídhe, the underworld land of the Unseely Court and the Good Folk. 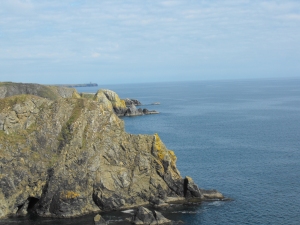 At about 45 minutes I was passed another unseen border and I was into water I’d never swum before. From the Guillamene it is all cliffs. There are some small beaches but they are inaccessible at the foot of the unstable cliffs. The last possible exist point is the foot of Newtown head under the Metalman, where it would be possible to climb the cliff and walk along the edge for twenty minutes back to the car park. Not exactly ideal if you are in togs. This swim was a commitment, a Lone Swim.

It continued to be choppy with the chop coming toward me from front and left.

From Illaunglas however I was passing one of my water borders from the outside, from the unknown water section into an area with which I was again familiar and which I think of as Wonderland.

The next twenty minutes took me toward Burke’s Rock on the outside of Garrarus, familiar water again.

Burke's Rock and Garrarus rocks, aka Wonderland, on a calm day from the cliffs, lots of currents and boat trails visible

With the tide dropping one of my plans to swim through what I call the Wonderland Hole wasn’t possible. I swam between the outside of the Garrarus rocks and inside Burke’s Rock with two fulmars keeping station above me.

From there I was heading across Garrarus bay. As I swam toward The Teeth, I could see three cars parked above the beach, I was back to a location where I could again exit the water, but with my car miles away, it wasn’t have been much use.

From Burke’s Rock, I swam between the reefs that I call The Teeth, because there are two lines of them and on a dropping tide you can’t take a direct line through but have to weave between.

From there I swam across on a slightly curving inward course toward Sheep Island. Sheep Island marks the end of Kilfarassey beach and was my intended destination.

I wasn’t the whole way across. It was one hour and thirty minutes, which I’d set as my turning-back time. I stopped and thought about it. Then I decided and I continued on.

Sheep Island on the outside from Garrarus

1 hour 40 minutes. Just inside the smaller island I call The Watchtower. Yes, I’ve been giving swim names to a lot of the features along this coast. 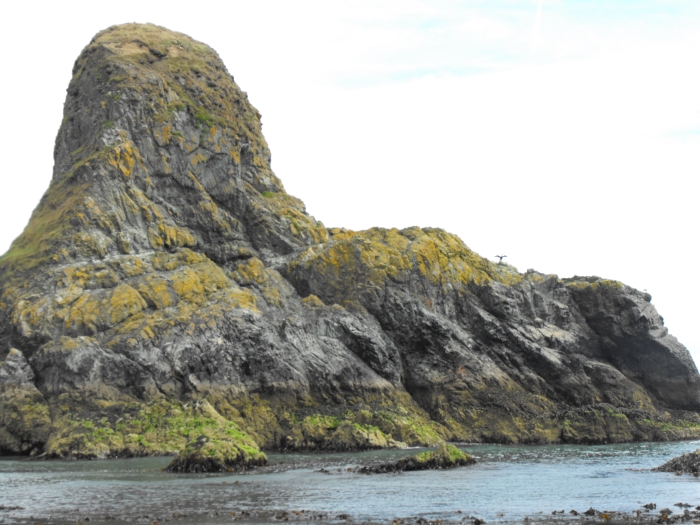 I took my carb drink, gulping about half of the 750ml. Then I started back. This time I decided to go outside of Burke’s Rock. The chop was now slightly behind me. It drove me a bit too far inward approaching Illaunglas and I had to swim outward to pass Cormorant Rock, many birds once again taking wing and skimming down close to investigate as I passed. One hundred metres or so I took half the remaining carb and headed for Newtown Head once again being driven inside the head. At two hours twenty-five I took the remaining carb drink, swam inside Seal Rock again with the chop behind me, but knowing that approaching it from this side if I took the left side of the short passage it would be deeper and safer. I passed within fingertip distance of the rocks and then looped deliberately outward for the final leg with the chop now finally behind me. The last twenty five minutes were tiring.

I reached the Guillamene three hours and ten minutes since I’d started. Nine kilometers total. I’d picked up ten minutes only on the return, indicating I’d hit something that slowed me. After I used Google Earth to figure it out , I realised that the whole expedition took longer than I’d expected, since the distance was only about 9k. Obviously I’d lost more time on the outward after passing Newtown Head, and I picked up less on the return than expected.

Guillamene to Sheep island and back

A good, and new, unsupported swim, with a sufficient amount of scary for me. Just to note, though I was swimming part of the coast I hadn’t swam before, I’d actually, as I’d obviously taken the above photos from the cliff tops and also knew the area of the turning point from swimming it.

I’ve often swum for longer than 3 hours by myself, but I’ve been working from a location that I return to during the swim such as Sandycove, Clonea or the Guillamene. I’ve swum further unsupported in less time (Tramore bay over and back). But this was the longest time unsupported without returning to a base. And in new water.

It’s similar to a Speckled Door over and back swim in Sandycove. The same lack of exits along the coast, and a swim which you wouldn’t normally do by yourself.