Having explored Kilmurrin to Boatstrand, an obvious step was to swim underneath the 50 metre cliffs to the west of the cove, toward Bunmahon. 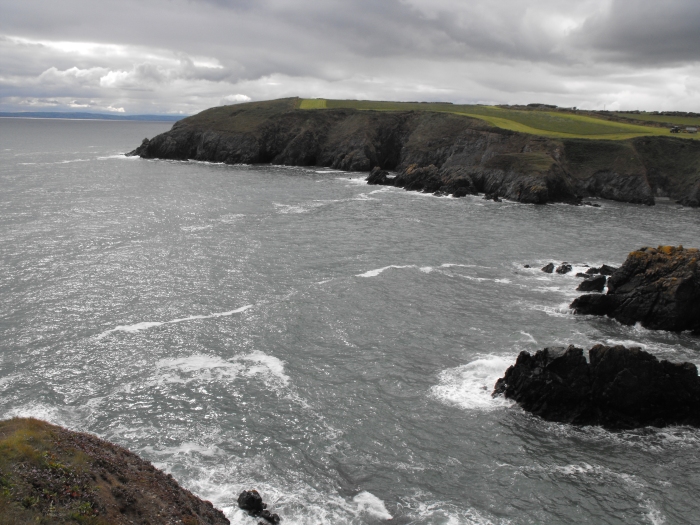 The conditions were typically similar. Force Two onshore. Tide was lower though, only half in the cove. 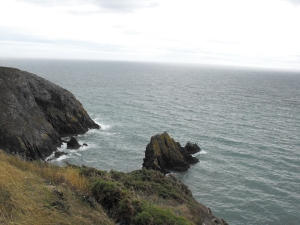 Back of Captain's Rock, west, outside Kilmurrin

I left via the usual route on the left of the cove aiming to the left of Captain’s Rock, outside the cove. It felt like a long straight swim out.  After 15 minutes the cars above the beach were still visible, I had probably travelled only 500 metres. Ok, this meant I was right into another contrary current, the one I’d seen previously.

CastleCoileen, more currents visible from above

I changed direction, headed in a bit to under the cliffs and aimed for Drumboe rock, the next outcrop along. As I approached it, the ruin of the old Cornish Engine building and the rebuilt chimney stack, high up on the cliff, appeared. These were refurbished a few years backs as part of the Copper Coast Geoparks project.

The conditions here were particularly noticeable, maybe partly because of the isolation. But I’ve often looked down from the cliff top here, and the height strips away what may be happening below unless it’s very big.

Looking down from the cliffs

Once again, like the previous return to Kilmurrin, I was swimming in nasty conditions, not caused just by wind, but by topography. Swimming along the waves, I felt like I was in two to three metres waves and I was swimming across them, through troughs and up peaks.

I didn’t reach the coast under the mine until 45 minutes since I’d left, very slow. I have to say, it’s scary out there. The water has a different feeling that what I’d expected from my times looking down from the cliff. It’s very exposed, and like Dunabrattin, not for the faint hearted.  On the way back I was getting pushed in under CastleCoileen cliff and next in behind Captain’s Rock, before coming around with the Cove appearing in front. Once again I aimed for the centre of the cove. The large waves that I had been subject to on the other side of Captain’s Rock didn’t seem to however be behind me as I’d expected. Instead it was just choppy water, with a little push as I entered the Cove, and small breakers closing out onto the beach. Once again I picked up time on the return, 10 minutes this time.

By staying close in, it’s a scary place to swim, that sense created by some of the higher cliffs along this coast, and the rough state of the water which is amplified once again by the sea floor topography and by the dark lowering sky and added to by strong currents. A short swim of about 90 minutes but not for anyone less than experienced open water swimmers, I think.

Kilmurrin to Cornish Engine at Tankardstown

One thought on “Kilmurrin Cove to Tankardstown”