Anyone following the new swim spot reports recently or looking very closely at the tag cloud (and why would you, since you actually have a life) may have seen a tag called Project Copper on the site for the past couple of weeks.

It recently struck me, in one of those why-haven’t-I-done-this-before moments:

Why not swim all of Waterford’s Copper Coast in a series of connected but unsupported out and back swims.

The EU Geopark website says the coast section of the Park is 25 kilometres. I haven’t worked out if it is longer by road or by sea!

The Copper Coast is one of Ireland’s most unappreciated coastal stretches.

If, and it’s a reasonable assumption if you are reading this, you love the sea and the coasts, the Copper Coast is a fantastically varied and interesting location. Clean water, beaches, stacks, caves, cliffs, long walks, lots of wildlife, and peace and quiet without lots of people.

Officially the east end is located a couple of kilometres outside Tramore Town. For the purpose of this project, I’m considering Tramore Bay as my start. The idea came about after the Guillamene to Sheep Island swim, two weeks ago. The west end is outside Stradbally.

The strands which are used regularly are Garrarus, Kilfarassey, Annestown, Boatstrand, Kilmurrin, Bunmahon, Ballydowane, Ballyvooney and Stradbally, some of these are not at all well-known except by locals. These are the only low sports and gaps in the cliffs that run the entire stretch of coast. The cliffs can reach up to about 80 metres height in places and vary in composition from crumbly earth to pretty stable (but still soft)  limestone. My eldest son is the one with the geology education, maybe I should get him to write about them. 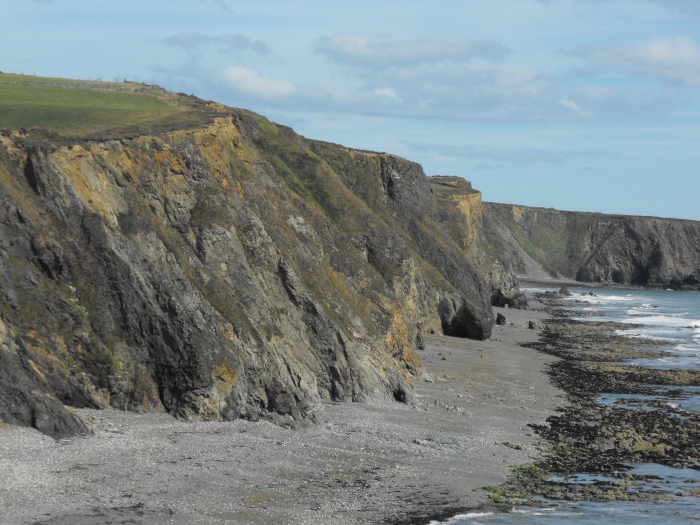 While people swim at those locations, and there’s plenty of fishing activity and kayaking along between Kilfarassey and Tramore, and surfing as I’ve pointed out at a few locations, from a swimming point of view, it would be interesting and challenging to swim all the connecting stretches of coast that have never been swum before, and do it in a way that would teach me (and therefore you) most about the coast.

But hey, I don’t have a boat or access to one. So I’m doing it all unsupported with no safety or escort boat. Perfect. More new loneswimming. Just me and the sea.

I set myself some criteria:

Most of these are just notions to add more interest and some complexity, like the tunnels.
So here’s the larger area map, from Clonea to Tramore Bay The two centre yellow pins are the two ends of the Copper Coast, the other two are my usual locations of Clonea and the Guillamene. Where would I be without Google Earth? The high-resolution sections of the Waterford Coast have only been added this year, but the west end of the section is still low resolution.

Because I like to metaphorically hedge my bets, I don’t talk about swim stuff too much before I attempt it. So I’m talking about this with a good portion of it already done, having already talked about two of the swims. More reports to come, more swimming to do.

p.s. All those Irish names. For those of you from overseas, who find them confusing I’ll do a brief précis another day soon.

The Copper Coast Geopark is located on the South East coast of Ireland, in
County Waterford. It extends between Tramore in the east, to Dungarvan in
the west, and comprises 6 local communities: Fenor, Dunhill, Annestown,
Boatstrand, Bunmahon and Stradbally.

These communities, with the support of the Geological Survey of Ireland,
were involved with the Geopark since the beginning as they were looking at
ways of developing sustainable geotourism in this rural area.

The Copper Coast is an outdoor geology museum with a geological heritage
that reflects a variety of environments under which the area has evolved over
the last 460 million years. Sedimentary and volcanic rocks illustrate the
closure of the Iapetus Ocean and subsequent volcanism; the collision of two
continents leading to the creation of Ireland – as part of a desert dissected
by large rivers; and, finally, the effects of glaciation during the Ice Age.
Cross-sections of these are exposed along the spectacular cliffs and
interpreted for the public at various points. For a brief introduction to these
rocks, a stroll around the Geological Garden in Bunmahon will prove instructive.

Copper was mined extensively in the area during the 19th Century. The
Geopark name is derived from this activity. The Copper Coast icon is the
mine complex on a high point of the cliffs. Panels there explain how the
system worked.

In recognition of its outstanding volcanic geology, as well as the very
significant history of mainly 19th Century copper mining; the region was
awarded the designations of “European Geopark” in 2001, and “UNESCO
Global Geopark” in 2004.

A Geopark is an area with a geological heritage of European significance. Its
significance is defined in terms of its scientific quality, rarity, aesthetic appeal
and educational value.

Here’s a closeup picture of stones on Annestown beach. For no reason other than I like taking closeups of stones. It’s big enough to use as desktop wallpaper if you like. As are almost all pictures here on the site. 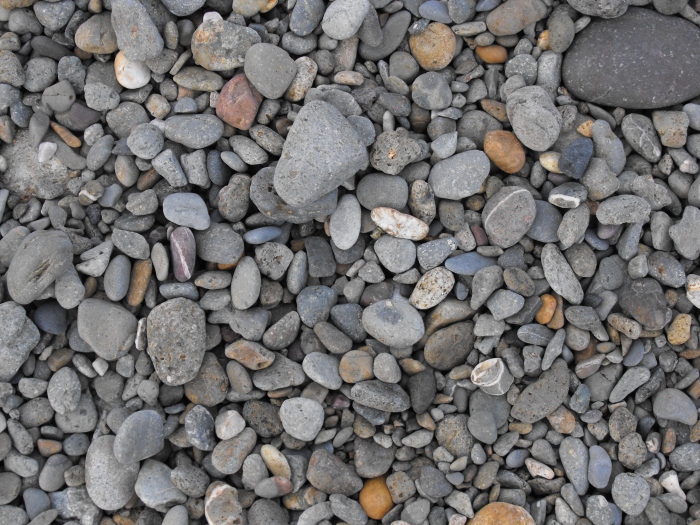