The fog lifted like a tablecloth pulled from beneath crockery in a magic show. One hour grey limbo, the next blue cotton-candy.

There are 16 ships going north and south out on the edge, in the heart of the battlefield.

The beast is restless and growling from the south-east.

100 gulls rise up from beneath the cliff edge, living boomerangs falling into the sky, just beyond reach. The air that has flung them skywards breaks over the cliff edge and flows around me. It is deceptively warm. I smell it and then glimpse France, the September afternoon sun casting a lawn of diadems on the water. In the sudden rush of warmth, I feel a chill on my neck.

The next day in the Channel. There’s a weather front coming in, the wind picks up quickly from the south. Clouds scud across a blue Channel sky throwing shadows on the watery battlefield.

Looking south on the English Channel at Varne Ridge

By early afternoon waves are bouncing off Dover´s east harbour wall, Shakespeare Beach is thrashed and the harbour beach is choppy, (though warm). Within a few hours the Channel is alive with crashing whitecaps, and then the wind drops again, and within a short time, as night draws in, the Channel drops to a mere unswimmable restlessness, preparing for another overnight blow from the west.

Evening looking north in the Channel

It´s neap tide, the soloists and relayers (and crews) are here, waiting. Waiting and hoping and watching.

The last thing in England any swimmer will see will be the radio mast above Dover, in the dark, like an anchor, pulling them, holding them, clutching them to the White Cliffs. 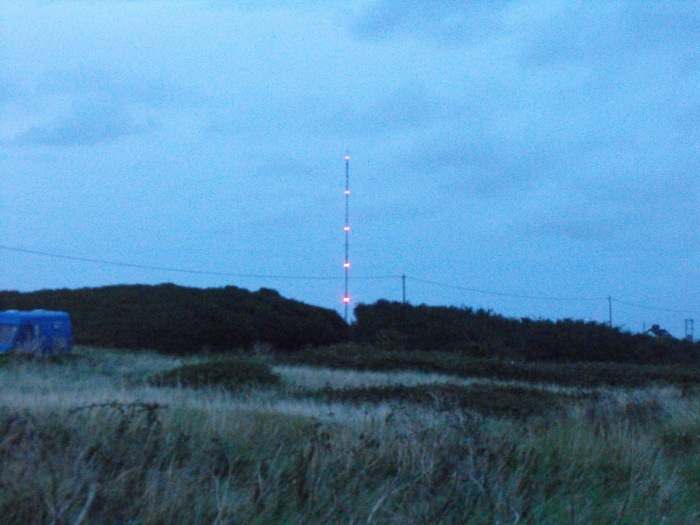 The Dover Mast at evening, looking small in the distance, but still hundreds of metres in the air

We´re on Dover time. The rest of the world doesn´t exist.

Fair stood the wind to France.When we our sails advance,Nor now to prove our chance, Longer will tarry: Michael Drayton, Agincourt.

Today we wake to Storm Force. Another day.

2 thoughts on “How stands the wind for France?”