I suggest you first read the (longish) article linked above.

To recap his core three arguments and concerns:

I’m not going to go through his arguments, you can do that, I´ll address some problems and make some points.

But I’ll make it simple and do a TL:DR (Too Long: Didn’t Read, i.e. a synopsis for those too challenged to read it all) for you:

All my arguments come down to one name that I want you to remember:

TL:DR – Phillipe Croizon. When you say his name, you know much of what Zornig says is exclusionary elitism. I agree with some other parts.

1. I started in a wetsuit. I dumped it pretty quickly and I discovered the fun (read: pain ) in trying to get better at cold in a cold land. But in Ireland, if non-wetsuit swimming was the criteria for starting, our sport would not exist. Zornig, who lives in a warm location with warm water and clement weather forgets this most basic of facts: all the world is not America.

We’ve noticed for example, that open water swimming is thriving in the cold waters around the Republic of Ireland as it is elsewhere. Why would that be? Two reasons:

Wetsuits allow entry, but acceptance of wetsuits facilitates the building of community, it allows people to operate at their own level and maybe later to progress beyond that. I have talked to enough swimmers to know that same level of acceptance does not exist around the UK, for example. But if someone does not desire to shed the neoprene, that does not make them less a part of our group in Sandycove. Of course those of us who swim without suits, who put the effort in, may mentally make an adjustment. But that’s up to us, without imposing our will or judgement on others. Maybe some of this is perceptual. As a Channel swimmer I get as annoyed as others at stuff like the Jamie Patrick swim and I’ve written about my thoughts about The Swim, and I was as irritated by some of the nonsense surrounding those as it was possible to be.

But here’s the kicker: nothing anyone else does has any effect on what I or my friends have achieved. Ronan Keating wearing a condom AND flippers and getting more media than any of us, does not lessen how I feel about my own or my friends swimming.

My sense of self-worth is not invested in someone elses results, even if the sport as a whole is demeaned. That is a powerful lesson I learned from the Channel.

Let me point out something: In Zornig’s article he mentions SBSA, CCSA, and CSA. He doesn’t mention CS&PF. I’m a CS&PF Channel swimmer. But that’s just coincidence Donal, you say. Is it? I’m not a Channel swimmer. According to the CSA, that is. The CS&PF recognises CSA swimmers, the CSA doesn’t reciprocate. Only the CSA authorities, and no actual CSA swimmers I’ve met, think this makes sense. So the world of associations isn’t untarnished.

Evan Morrison makes the point about marathon swimming’s heritage. As I sit here in Dover at the centre of the marathon swimming world, I have no doubt that the continuity of that shared tribal history continues. Our rules exist. They will never change. No-one outside of our group, except other extreme endurance athletes, WILL EVER UNDERSTAND what we do.

Irish SeaIf we could explain it, we already would have, and since we haven’t and can’t, we use all the other methods and clichés and analogies. But only our peers understand. So when Jamie Fitzpatrick is claiming X or Y, the people who matter, the only people who should matter, marathon swimmers under Channel rules, will know the truth. In the interim, why should we care that he gets recognition? Yes, I’m far from Buddha, I’ll be irritated, but it has nothing to do with what we do.

Last week’s The Swim Irish Sea relay had a similar impact in Ireland and the UK, we were all annoyed, mostly that the real swimmers like Colm O’Neill hardly got mentioned and it was all about a bunch of celebrities.

But I read the wall in The White Horse and I am both re-assured of the future and the continuity of the past as it remains the greatest achievement to write your name on the wall.

2. I’m not aware of bootlegging as a problem here. I completed my Project Copper swims solo and unaccompanied. You can choose to believe me or not. I claim nothing about them other than written here. Of course, I have a reputation, by which I only mean I am known in a small circle of people; my friends and you guys reading this.

Unless you are intimately involved with open water in Ireland, you are unlikely to know about our biggest bootlegging problem, where a high-profile swimmer claimed to have swam the Mouth of Hell while on a training session. No observer was present, the media interviewed the person. In a brave move, one of Irish Open Water’s most recognisable and high-profile people called the swimmer on it publicly, legal letters were sent, etc, but eventually the claim was retracted. By then every open water swimmer had seen the pictures and knew the claim was bogus.

How do you address this concern? There is no way. People will go outside the organisations. There is room in the water for everyone. One local newbie, from a pool background was going to try a local swim and claimed that it would be longer and tougher than the English Channel. The only effect was to alienate the entire open water swimming fraternity in Ireland from the person. The person could have done the swim (they failed due to poor planning) but it wouldn’t have meant much to any of us (none of us were fooled either in believing it was remotely comparable) since there was no observation or validation.  Balance was restored to the Force

What matters, what has always mattered, is validation. A SWIM is a validated swim. An officially observed swim. No issue. Once again I refer you back to the difference between the CSA and CS&PF. If we have an organisation which claims primacy and sole validation English Channel swims, which fails recognise other Channel swimmers, then we have a problem internal to marathon swimming, so we can hardly throw stones. I know I’m not supposed to talk about this publicly. The last time I alluded to it, I was privately chastised.

And I recognise that discussing the issue publicly may cause difficulties for the CS&PF, of whom I’m a member, but despite my regular visits to Dover, I’m a far-flung member. And maybe we need to continue to raise this issue.

As someone I know, again very high-profile, has said; “they (CSA) don’t think I swam the Channel. So fuck ’em”.

3. Part of the previous of course displays the problem of media. I’m more in agreement with Zornig on this. But it is the nature of the beast. When you lie down with dogs, etc. The media doesn’t understand the difference between anything, and the person or persons with the loudest and best publicity machine will get the most attention. Plus ça change (plus c’est la même chose). I’ve also said, is it that important? I would like to see an educated media, but I’m often told I live in my own imaginary world.

What IS really important, is that media, traditional and web, that talks about swims needs to makes two things very clear:

I’m not a swimmer. What? you say. Yes, so I’ve been told, so my friends have been told. If you were not a competitive pool swimmer at the age of twelve, then you are not a swimmer. Hands up all of you swimmers who have heard this ridiculous bullshit.

I started and moderate an anonymous swimming forum with over 2,000 swimmers elsewhere. Elitism is a bannable offense. I’ve never had to actually ban anyone, because one warning always suffices.

We are swimmers. We swim. We should embrace diverse aspects of our sport, make it accepting and welcoming. It’s pretty disappointing that the elitism in now coming from open water swimmers as well as the people in the chlorine boxes.

Scott Zornig is president of SBCSA, but pretends to write as individual, while still retaining the privilege of that position. I harbour no ill will toward him, I know no more of him that he would of me. I’m just one Irishman with a keyboard and too many opinions and no more important a voice than anyone else.

Your mileage may vary. Objects in the rear view mirror may be imaginary.

Hang on, I’m almost there.

I’ve haven’t had time to plan out this response, unlike the initial post, this is off the cuff. 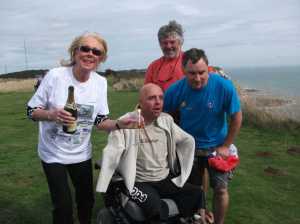 We are all humbled. David & Evelyn with Philipe in Varne.

Swam the Channel in a wetsuit. With no limbs. Swam with the CS&PF, (which means incidentally I will remain CS&PF, regardless).

Channel swimming, left to the so-called traditionalists of the CSA, would have dictated that Philipe Croizon would never have swum the English Channel and we would have lost that transcendent vision of inspiration and over-coming adversity.

And forget your special pleading. Forget marginalizing for different cases. It looks in the article that Scott Zornig has decided he doesn’t like something, and much of his response is a post-hoc justification. I remember what I learned when I was in school and they said, if you are not with us, you are against us. I learnt that it was always the only choice to be against them.

Evan, I’m sorry, I say this in respect as you know, but if you say: If it’s impossible to do without a wetsuit (and it’s probably not), it’s not worth doing with one, that would rule out Philipe. And if you say, it doesn’t apply to Philipe, then that’s special pleading. Then rule me out also. I’m with the guy with no arms or legs.

I guess there’s little chance I’ll ever be allowed to swim Santa Barbara now. Before I published this I walked 10 metres and took a photo. Here it is. Top right, bottom left. Proud to be on the same wall.

EDIT: I meant to write Jaime Patrick above. Apologies to Triple Crown Winner Jamie Fitpatrick! (Fitzpatrick is a common Irish name, I didn’t even realise I’d written it). 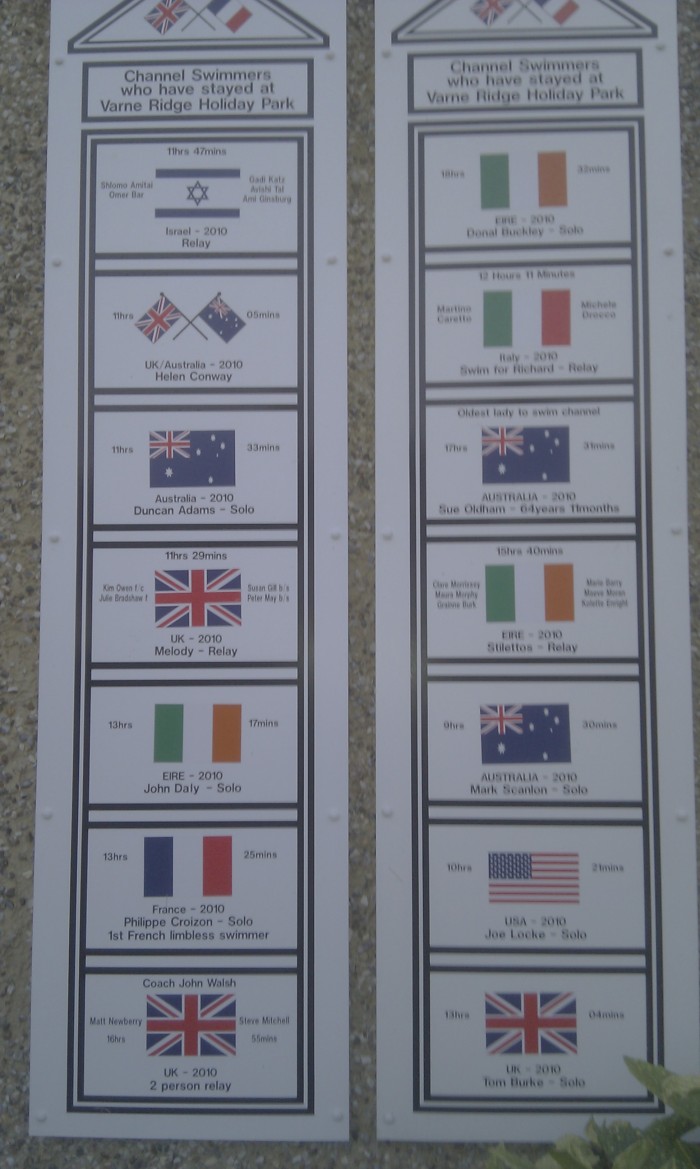 Sharing a wall with Philipe Croizon

5 thoughts on “Choose your weapon. Wetsuits at Dawn?”