I remember my first six-hour pool. It was done with the Magnificent Seven in Source Swimming Pool in Cork in January of 2009. I’d done  a couple of four-hour swims by myself, just swimming pyramids. I’d also done one five-hour by myself the previous year (pool).

But the first six-hour pool swim with the group was a big deal.  I barely swam the day before, something like two kilometres, resting up. I carb-loaded the night before, didn’t sleep particularly well and had to leave early in the morning to get to Cork. I brought lots of food and liquid. The food included smoothie, fruit, sandwiches (I’m from Tipperary remember :-)). I’d had a very large breakfast before the hour and a half drive. We stopped to eat halfway through the swim, which was a mixture of sets from Eilís. It all went fine. More and longer swims were to follow.

Two years later, I’ve done plenty of six-hour swims, both sea and pool. Last week I did another six-hour pool swim, my first since returning to pool training four weeks ago and it was odd mix of experience and a cavalier attitude. I trained the night before, a standard set of just over 5k and was tired in the morning. I gave very little significant thought to the swim, I’d just been jealous the week before when I joined Lisa and Karen McAvoy at the end of their 20k swim. I wanted to look and feel wrecked again.

How perverse is the marathon swimmer’s mind?

I had a bowl of porridge and a small smoothie and mug of coffee for breakfast and left for the Kilkenny Watershed pool.

I brought one small “fun-sized” banana, and another small smoothie, about 250ml. I had a couple of old sachets of Go Sport carbs  (146 kcal per sachet) because I was out of Maxim. The Go Sport was only a year and a half past it’s Use-By date… I also had some Hammer Perpeteum that we don’t see here in Ireland, which Alan Clack left behind him after the Cork Distance Week. During the swim I ate the smoothie and the banana, and used one bottle of half-concentrate Hammer,  and used one and a half bottles of the sachets during the second half.

My attitude was even; “I’ll do 4 hours, see how it goes”. That was it.  No thinking about it, no nervousness, hell, not even much preparation. I even forgot to bring any painkillers.

The first hour was easy, sharing the lane with two other people, included a 1500 with paddles, and I finished 3k at 50 minutes. I had the lane to myself for the next three hours as I worked through the long set mix, which included a lot of 400s and 75’s particularly, with a lot of paddle and pull work. I’d had a flare-up of an old lower back problem on Monday and it returned during the third hour, which was when I realised I didn’t have any painkillers but it never got bad enough that I wasn’t able to continue, I just had to do occasional stretches. (The normal solution for this back problem for me is a massage). 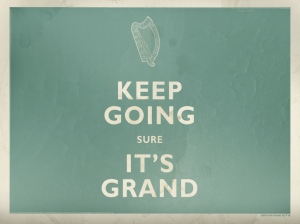 At the end of the fourth hour, I was feeling it but saw no reason not to do a five-hour. And then there wasn’t much point in not continuing to six hours. At six hours, I decided I’d really only been swimming for about five hours forty minutes or so (a guess), due to refilling bottles, toilet stops, a lane change etc, and I might as well do another thousand metres, exactly as that logo on the right indicates.

I finished at six hours and twenty minutes, and when I did the check I had done 17,800k. Nothing of note happened. I was tired and happy but could have kept going. Because I was on my tod (i.e. by myself), I was able to stay more focused on keeping my stroke form. I was doing 5 x100s in the second-last 500 and it was really striking that though I felt the stroke was still pretty good by the end, my time per average hundred had dropped by about 10 seconds due to muscle tiredness and shortening. I was sluggish the next day but the local pool was closed for maintenance anyway, and I was still slow two days later though i did a full 5k set. By three days later in the sea I felt back to normal.

Next day I realised I had passed through the yearly one million metres target that day also. Good day.