Evan did a great 4-part series on open water marathon feeding and nutrition. I’ve covered the possible use of Choline supplementation and I’ve a long-standing request in with a friend for a guest post on the subject of further supplementation.

Given some questions that have arisen though, it seems we haven’t covered enough of the subject. It struck me that we hadn’t covered mechanics and some of the complicating factors.

Let’s start with a reminder:

The most important thing is: Feeding is different for everyone.

Feeding is not diet or general nutrition, but the process of taking in nutrition/food for energy during a long swim. It’s a long and complex subject which entertains and causes endless discussion amongst marathon swimmers.

The next most thing, the marathon swimming motto: Practice everything.

You can generally assume that you have enough glycogen in your body to last from two to three hours. (Contingent on not having depleted it in training or recent exercise).

So for a swim or race under two hours, you probably don’t need to feed.

Swims where feeding is necessary dictate practice and experience.

FINA marathoners will probably feed small amount every 10 minutes from a plastic cup. This technique was pioneered by Peggy Dean and the US team in the 80’s. The rest of us tend to feed at intervals from 15 minutes to 45 minutes. (I feed at thirty minutes). But this MUST be tested, everyone’s requirements are different.

Also, you may not need or want to start on intervals right from the start of a marathon swim. it’s quite common that swimmers will feed hourly for the first two OR three hours and then switch to their shorter interval. Once again, I cannot tell you what those times will be for you. The four to eight-hour swims that we do in Sandycove give us the advantage to test these factors. It is another reason faking a qualifying swim makes someone a fool to a more experienced swimmer.

For most swimmers, the primary fuel is maltodextrin, pure carbs,, as Evan has covered in detail. (Not however glucose). The product name isn’t important though Maxim is by far the most popular for distance swimmers as it has no taste and can be added to any food or drink. It’s a 100% maltodextrin. High5 or similar are carbs with a protein mix in a 4:1 ration, scientifically shown to be more effective in metabolization but has proven to be a problem for many swimmers (e.g. me) in distance sea swimming for a few reasons: (salt intake, prone position, soya protein metabolization).

Again, there are many exceptions. Some swimmers like gel pack (like GU) others won’t touch them, as they can be useless because they require a separate liquid intake, and the salt intake during a swim can make them useless or cause exceptional bloating or vomiting. Some English Channel Pilots only believe in/use Maxim.  Many swimmers have no problem with a 4:1 protein/carb mix, (I am not one, like a lot of swimmers, I found after about four to five hours with it I am no longer able to digest). Some swimmers forego these methods and swim on solid food (Penny Palfrey used dilute porridge).

For myself for swims, I attach a D-clip to the bottle itself (whether by tape, string or lid attachment), and then the line attached to the clip, rather than tying a line to a bottle directly, as having multiple changeable bottles allows more flexibility.

Feed (dolly) poles (typically a wooden brush handle … ) have a hook or holder on the end, which hand a cup or bottle to the swimmer. The one on the left is one used by Alan Clack on a 10k Lac d’Archambeau swim last year.  Poles are good in flat water but they are less flexible in bad weather as they require a fixed distance to the swimmer. If using a pole the swimmer must not grab the pole itself. I’ve also seen (and used) a telescopic fishing pole but the line is too light and too easily tangled.

Or simply a bottle dropped on a rope. The problem with this is knots and retracting the line (this was a mistake I hadn’t considered in the Channel).  A solution I’ve seen and really liked is a simple traditional-type kite reel (usually made of plastic).

My subsequent solution … A retractable dog-leash, my choice for future swims. So much easier for the crew. 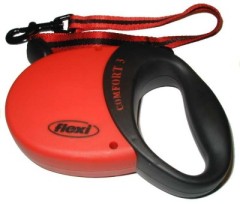 Many experienced swimmers will often only use a container or bottle with particular features. I’ve written before about the God Bottle. This is not necessarily a minor concern as using a wrong bottle type for a swimmer can lead to salt water or air ingestion, both significant is you are swimming for more than 6 or 8 hours. Gábor used a narrow neck squeezy sports bottle, as that was what he used in training and practised with. (I must have a wide neck bottle… However some swimmers just don’t care or don’t have an issue).

Mike Oram, famous English Channel pilot, prefers plastic milk cartons, which have a wide neck and a handle to attack the line, and are easily replaced. Liam Maher added the point that it might be good idea to collect your milk lids for a week before hand, so the crew have more lids than bottles, that way the swimmer isn’t focused on trying to replace the lid.

Stephen Redmond  uses a twin bottle approach to swimming: A standard squeezy bottle and a shaker bottle, taped together but in opposite directions for easier access!

You must consider the water temperature: Should the food be warm or cold? Most Channel swims are cold or cool water so warm feeds are essential. But that can require  a lot of warm water. Your pilot may have a galley where water can be heated, but in rough weather this isn’t easy. One solution to this, just in case, is to bring a thermos (or many) of hot water. Pre-mix the feed to double concentration (half volume) and top up with hot water. The crew MUST be careful not to burn the swimmer, which can happen easily as the swimmer’s mouth will cool down during a swim. Bringing a thermos also frees up the crew to look after you.

In a sea swim, the best swimmers will still ingest salt from the air. So the actual salt requirement is low. One misconception I run with swimmers into all the time, is the bodies need for potassium. How many times have you seen/heard someone have a cramp while pool swimming and someone tells them to eat a banana beforehand “for the potassium”? But usually that’s just simple dehydration. Bananas also provide magnesium, another essential salt, used for ATP synthesis, but we do not need huge amounts of either and deficiencies are rare, and in fact too much potassium in a 24 hours period will slow digestion and cause vomiting. That said, scheduling in an electrolyte is not uncommon for long swims, and allows the body a respite from the carbs.

An hourly feed plan give a swimmer confidence their requirements are being met. Just as importantly, if the primary crew person goes down with sea-sickness, a feed plan that can be handed onto the next person means continuity in feeding. Feed plans can include extras. For example mine includes an asthma inhaler drop on four hourly breaks, just in case. The plan can also be used to schedule in special treats or prophylactic pain-killers.

Do you have enough supplies if your swim runs over expected time? If you are Lisa or Stephen and are out in the water for 24 to 36 hours, do you have enough water and carb to keep going, all other things being equal? Are there enough supplies … for the crew? Better to take 40 litres and throw out 20, than take 10 litres and need 12. (I know this is not environmentally sound, but there is no way around it).

Finally, do not assume that knowledge of feeding in other endurance events will transfer to sea-swimming. It most likely will not, for example the gel packs beloved of tri-athletes, the extra salt intake and the prone position, are all complicating factors in sea-swimming.

Remember, practice everything. Which means consider and think about everything.

8 thoughts on “How To: Understand Important Factors in Marathon Swim Feeding”