Guest articles are one of the huge joys and honours for me in writing loneswimmer. I always feel lucky to feature one of them and privileged when people agree and I to get to read them in advance.

Chris Bryan is from Shannon, Co. Clare (west of Ireland, origin of the Irish Coffee!) and is Ireland’s first international  5k and 10k open water swimmer. His training base is the High Performance Centre [HPCUL], University of Limerick Arena  in Limerick, one of the two High Performance swimming centres in Ireland. He’s in his fourth year of college studying  Sport and Exercise Science and was born in 1990.

A minor one, but if I’m not mistaken, I think he also holds the lap record for Sandycove Island, has been unbeatable when he has raced it.

I’m delighted to contribute towards LoneSwimmer.com [not as much as I am – Donal]; hopefully it will help me to reconnect with all the real open water swimmers at home. I’ve currently fallen out of the Irish national circuit as sadly most races I have had my eye on seem to clash with my international commitments.

I’m currently training in the High Performance Training Centre in the University of Limerick under Coach Ronald Claes. The centre is broken into development squads which hope to feed swimmers into the main ‘Elite Squad’ in which each athlete has the opportunity to compete at the highest level internationally.

The Elite squad program involves up to 10/11 swim sessions on a regular week.
Training starts in the morning on deck at 5.10a.m., where 20 – 30mins of dry land work is done.

Then to the pool! In the morning this can be from 5/6km up to 17/18km, all depending on time in the training cycle & season and the week intensity! Of course all swimmers in the squads are broken up into their groups based on their race distance. (Sprint / Middle / Distance / OW)

In the evening we begin at 2pm if we have a gym or circuit training, or 2.30pm if we just have a choice of land warm up/loosen out before the swim session. We begin in the water at 3pm. Distance in the evening is usually less ranging from 3 to 7km.

Post all swim sessions a certain amount of ‘pre-habilitation’ is always carried out such as flexibility and general stretching, muscle control and core strength. Of course this includes shoulder control and stability work. Swimming is not a natural movement! We were not designed to rotate our arms thousands of times a day above our heads! (On average we’ll say 35 strokes a length and for 14km/280 lengths a day, in other words 9,800 times! And that’s a relatively low estimate personally)!

I do a lot of Internal and external rotations with a theraband twice a day after every session,

For me personally I find that if I go a few sessions without this I get a constant ‘niggling’ in my shoulder which is just something I can’t afford to worry about.

The Elite Squad is supported by a coaching, sports science & medical team:

All areas which are of importance to high performance sport and development. Some support is used more than others but they are all vital ingredients on the way to success at the highest level.

I am very privileged to have such a structured and fully supported set up, I have been to many world-class squads over the past few years and have seen the training base of some of the world’s best and I can confidently say that in UL through the support of the Sports council, Swim Ireland and the University of Limerick we have the facilities to compete with any one of those international set ups.

Still there are no short cuts to success – only hard work and attention to detail and “Without self-discipline, success is impossible, period.” (Lou Holtz)

Having confidence in your training regime and confidence in the staff is essential, it’s hard enough getting up at 4.35am without having to ask if I’m really doing the right things in training, it’s a blind faith in my coach that I need. Studying Sports Science does gives an extra insight into my training and often helps me get that little more out of myself when I know ‘this I what I need to do to succeed’ , but it also raises many questions and doubts, but I very much have to emphasise that just a little bit of information sometimes can be a bad thing. So I leave the worrying up the coach and blindly follow!

One question I often get asked is about the major differences between pool swimming and open water, they both can be broken into 2 main areas in my opinion:

Stroke: A higher and more relaxed stroke is essential for the open water. In the pool stroke length is of huge importance for swimming fast and count strokes per length cannot be under estimated, for open water the focus on training a higher rhythmic and comfortable stroke rate often out-weighs the need for stroke length based on the constant changing environment of open water.

Race perspective: In the pool there are 8 lanes all the same length, same width and with the same amount of water in each, really from a purely physical aspect it is non-contact and nothing the competitor beside you does can affect your race, this is a constant environment. In the open water every race is different, competitors, course, temperature, chop. This constantly changing dynamic environment makes things a lot more uncertain and ‘race smarts’ become very important. There is of course always going to be a little bit of luck to each race, but the thing I find about luck is that, the harder I work the more I tend to have of it! It’s also not by chance that the best guys always seem to come out on top!

The basics of both in and out of the pool though are not so different, the technical aspects of the stroke, the physical conditioning, and fast swimming! The 10km marathon event is the Olympic distance and on average the pace would be 66-68 seconds per 100 m long course [Donal’s added emphasis]. With the last 1000m being the fastest and the last 400m being about 4 minutes at the top level.

I have always considered myself a hard worker and am a very driven person but one major lesson I have learned over the past two years is the importance of smart training. It is of course to train hard and to the best of you abilities but if there is no structure or no time for your body to adapt and recover from the training it doesn’t matter how hard you train!

I find the above graph very important, training isn’t just about what you do in the water or in the gym but what you do outside of training is just as important! It’s a 24/7 career, if you don’t recover appropriately then all the hard work will never be as effective. I try not to obsess about this but rather make sure to follow a few rules of thumb:

First we make our habits, then our habits make us.

This year is an exciting year obviously being an Olympic year, especially for me as it is probably as close to a home Olympics that I’m going to get. The qualifying procedure for open water is a hard one and slightly complicated.

Olympic Qualifier, race 1 of 2: World Championships 2011, 10 athletes qualified, the only opportunity for 2 athletes from one nation to qualify, 2 athletes from both Germany and Russia made it in the top 10. The average age of the Top Ten was 28 years.

Olympic Qualifier, race 2 of 2, Portugal June 10th: There are 15 more places up for grabs. A Top 9 finish guarantees qualification (only 1 per nation). There is then one spot allocated for Great Britain and then one place (5 in total) are allocated to each of the next highest placed competitors, one from each continent after the 9 already qualified. In the case where there is more than one per nation in the top 9, the second place will be reallocated to the 11th place finisher and so on (per continent). 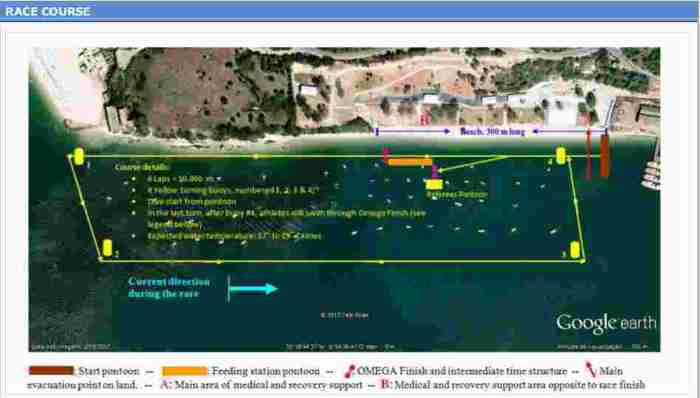 There are 62 entires for the race at this point and a lot to play for. Training has gone amazing this year and I’ve left no stone unturned and have made sure to put myself in the best possible position, so now I just have to be confident in my preparations and know what I’m capable of and if anyone else thinks they deserve to qualify ahead of me they sure as hell are going to have to work for it! Qualifying won’t be easy for anyone in this race no matter if you’re World 25km or 10km Champion, 1500m Olympic Champion, English Channel record holder, they are all in there, but for me I can’t possibly imagine anyone wants it more than me, or has worked as hard or as smart! “There’s only one way to succeed in anything, and that is to give it everything!’

I hope to continue in this chase to pursue the chance to reach my utmost potential. After this year I hope first to finish my college degree and manage to juggle my training and athlete lifestyle around it. Even though my schedule is a hectic one, I am someone who loves to have structure to my life and I will always have goals and certain aspirations in which I will strive to achieve, be it academic, sporting, family or business. This sport of swimming has already afforded me so many positive experiences and has made me into who I am moulded me to become the best I can be in all aspects of my life. It’s given me contacts, friends, colleagues, the opportunity to travel the world and meet and talk to some truly inspirational and amazing people. Ever since I was young I dreamed of being able to compete with the best in the world and always knew I could. It is that deep self-belief that keeps me going through disappointing results, and grows from the good. I hope to continue to achieve and compete at the highest level and by no means intend to sell myself short. Who knows what the next few years will bring if by Rio de Janeiro 2016 I’ll be challenging to achieve at the pinnacle of my sport.

Reminder again of Chris’ Twitter and Facebook accounts. And everyone? Let’s all wish him the best for next Sunday’s Olympic Qualifier and the London Olympics.

There is a link broadcast of the race on Portuguese tv, but there is also an internet link and this one.