Saturday indeed broke more bearable, with temperatures in the high twenties with an almost cloudless sky and no forecast of rain or thunderstorms.

I’d brought my bag of oatmeal for porridge which I microwaved in the hotel dining room, and as usual, forced it into myself. It was not the best bowl ever made, even by my appalling standards, resembling a rapidly hardening tiling grout. To follow this was a concoction consisting of more oatmeal, Greek yoghurt and mixed fruit juices from supplies purchased in one of the ubiquitous local pharmacy/markets, (which just confuse us poor Irish country people; where do New Yorkers do the weekly “Big Shop”?). Smoothie and porridge, breakfast of marathon swimmers, taste and enjoyment not essential.

Protip: bring your own big funnel

Using another trick from Lisa, I’d applied suntan lotion the previous night, which never seemed to dry completely. But I’d slept moderately well, which I wasn’t worried about anyway, as I’d slept well on Thursday night, which I knew was sufficient for me for a big swim. A lesson leaned the hard way, as so many more. I never expect to sleep the night before a swim, but jet lag provided some assistance. We’d packed the swim and boat gear the previous evening, much of it in my large dry-bag and I’d sat on the floor of the shower mixing Maxim into 1.5 Litre bottles. Mixing Maxim is a sticky job, even when you manage to mix everything dry, which I didn’t. The bag included things that had seemed more necessary back in cold and wet Ireland; wet-gear for Dee for the boat, wet and warm gear for me in case I had exit the water for a period due to lightning, all utterly superfluous, even ridiculous as it turned out. Four hours after reaching New York I’d emailed Ciarán asking what kind of idiot I was that I’d brought two, two, hoodies AND a heavy merino wool top to this insane heat. I have become so conditioned to cold and wet.

As an aside, it’s usually easy to spot Irish people in an airport. They arrive at their destination wearing utterly inappropriate warm clothes looking like polar bears lost in the Caribbean oozing sweat from every pore, and arrive home to Ireland, rain and cold, wearing sandals and shorts and sombreros. In winter.

We headed for Pier 25 for Dee to meet the boat and load the gear. The taxi driver conned us and we found we’d overpaid him for being nice, quick and helpful, when instead he’d dropped us at Pier 66, well Uptown. Uptown is a technical New York term by which I demonstrate my suave well-travelled and cosmopolitan erudition. But as happened all week a friendly New Yorker helped us get a taxi across the highway. Yes, Manhattanites are on the whole friendly, and were so repeatedly, usually without asking. That’s some bad PR Manhattanites have been getting, someone should fix that.

Pier 25 was busy with Soloists loading the gear and the relay teams bustling about. If you knew what to look for you could tell the experienced Soloists. I saw one relay team sitting on the ground trying to mix feeds from scoops into narrow bottles, asking how much was needed and where was the suntan lotion. The Soloists who were around were ready to go. 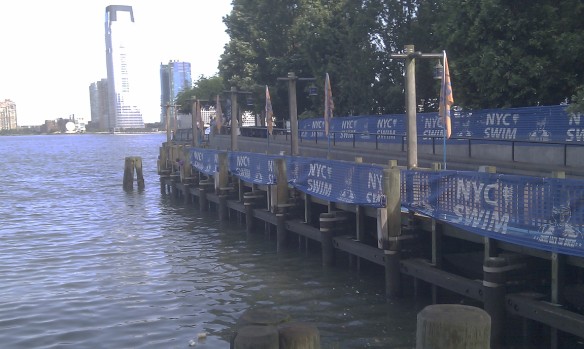 We said out farewells and made for the Start Point of South Cove, at Battery Park on the west side just around the south tip of the island. The water in the Cove was looking pretty dirty, but experienced swimmers know this is just an effect of eddy currents gathering debris. Carol Cashell (from Sandycove) had told me that when she swam The Little Red Lighthouse 10k last September the water was so murky that she couldn’t see her hand. I’ve swim in conditions where my arms and hands are invisible to myself, so it wouldn’t be a surprise, but it does have some implications for trying to concentrate on your stroke for a long time if you can’t see where your forward hand is.

Ciarán and I met Thomas Kofler, English Channel Soloist and graduate of the first Cork Distance Camp; George Meenan from Derry, also an EC Soloist and our third compatriot, and others such as Graham Lowe from the Jersey crew, Genevieve from Canada, Kent Nicholas from Arizona, Jim Fitzpatrick, Yale swim star Abby Nunn and others, (and sorry I didn’t get to meet everyone). With Thomas there it was literally like having a bonus Sandycove Swimmer around.

{By the way, after Thursday’s Brighton swim, Friday’s Briefing, and the morning’s pre-swim chat, I was utterly astonished and gratified that so many marathon swimmers knew about loneswimmer.com, and that’s not false modesty, you know by now what I say; one average swimmers in the middle of nowhere, taking shite}.

But it was hot. Drinking and walking to the distant toilets to urinate, we waited and talked and chatted to the occasional bemused passers-by, roared at Shaggy as he ran past (Ciarán is from Leinster), and waited some more. And we put on more suntan lotion.

With no camera, I can only fail to describe George, who, even more worried about sunburn than Ciarán and I, resembled someone who’d emerged from a tub of pancake batter due to the layers of suntan lotion and lube applied. All over. All. Over.

The support kayakers arrived in South Cove, flocking and jostling about like a bizarrely coloured flock of new marine wildlife and where possible we grabbed an introduction, and I shouted an Hello to Brian Johnson, my essential paddler, safety, navigator, feeder and lifeline.

They assembled us on the board-walk in groups according to our start waves, with no shelter, and almost no water. Then they reassembled us in groups. Then they reversed the order of the groups. Meanwhile the sun bore down, we all ran out of water, and there was no shade.

And we dripped, indeed we veritably oozed. Suntan lotion, petroleum jelly, emulsifying ointment, Channel grease, whatever anyone’s lubricant of choice was, flowed in rivulets and the smell of slowly self-basting swimmers wafted gently along the board-walk, all desperate to be in the water and protected from the heat.

The last minutes, like my Channel Grease, seeped slowly away.