There is no swimming in this post. I really wanted to get swim just for the fun of it, but there was no safe exit point except at the pier and I knew I’d cause mass panic there, probably resulting in Rescue 117 being called out again. Does this mean I am growing up? Surely not.

Still, a couple of times a year we get a really big blow that hits the south and south-east. It’s half way though August, the month most Irish people take their hollyers (annual vacation), and a big low depression out in the Western Approaches drove a howling short-duration south-easterly Storm Force 9 onto the south coast. A south-easterly always provides a spectacle on the Waterford coast. Two trees were lost on the Loneswimmer Estate, and the brand new replacement diving board at the Guillamenes was snapped off, a board so heavy it took 6 adult men to lift recently.

High tide was late afternoon, and the wind increased from mid-day, luckily not hitting the maximum Storm Force until a few hours after high tide had passed. Anyway this is just an introduction. Everyone loves storms pictures. I took a lot of photos (400!) at the Newtown and the Guillamenes, Tramore Pier, Ladies Beach, and both ends of the Prom and managed to whittle a few I liked from the lot. (I’ve held a couple other back for future use, including my favourite). Long time regulars might have noticed I starting reducing resolution earlier in the year, to save me uploading full resolution images which weren’t required, it saves me time and WordPress Server space, and  saves you trying to load a 200 MB panorama pic. (I still have to go back and tidy up some of those, housekeeping isn’t fun).

Newtown Cove was wild before high tide and despite the rising storm, the sky was blue and the day was warm.

The sea breaking down onto the Newtown Cove platform. The blue sky only lasted a few minutes later than this image and was disappearing by the time I walked back to the car park.

Outside the Cove it was pretty big, waves looked about five to six metres, with occasional set waves at maybe seven to nine metres.

With the howling onshore, this meant breaking waves with spray reaching up to about 80 feet high. 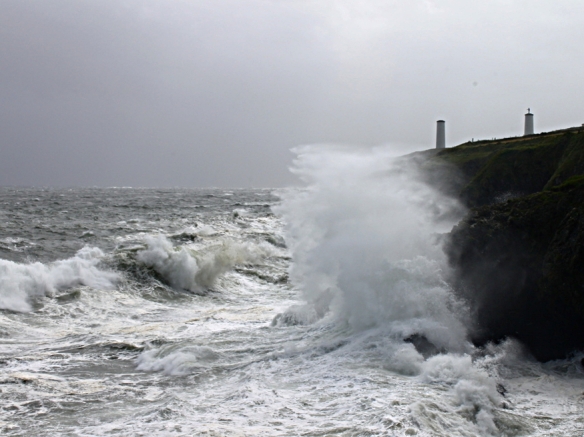 The Guillamenes platform was completely inaccessible as waves exploded over it, occasionally even breaking over the top of the changing alcove. It wasn’t safe to go down past the first couple of steps, and it certainly wasn’t dry.

No wonder the diving board snapped with the volume of water bearing down on it.  Normally the board would be removed before the worst of the storms hit.

The bay provided a nice canvas. Tramore is a shallow bay, it was this type of onshore storm that was responsible for the loss of the Merchant Marine vessel the Seahorse in the late 19th Century in the Bay, and led to the erection of the pillars on Newtown and Brownstown Heads at either side of the bay, pillars you are well used to seeing here, the indicators of my swimming home.

The bathymetry of Tramore Bay is a long sloping sandy bottom with sandbanks going out a long way, which cause waves to jack up and break far out in these conditions.  And of course the bigger a wave the farther it reaches down to touch bottom, the slowing of the bottom of the waves is what causes it to break from the top as the lip spills over.

By the time I reached the pier, there were rain showers and photography became a bit more difficult.

From Newtown Head, past the Guillamene and Comolene rocks, into about a hundred metres in front of the pier under the cliff, was the direct straight line from the incoming south-easterly waves. The bay is shallow in front of the pier and there also are reefs and heavy thick kelp beds to suck the energy from the waves before they hit the cliff under where I was standing. And I finally got a decent image of something I’ve long been trying to capture; direct line of an onshore storm.

Taking pictures of just the sea is bloody difficult. Like you always look heavier on camera, photos often strip the power, grandeur and pure scale from the sea. This image isn’t as showy a photo as big breaking waves, not as obvious as most of my shots here, but this is a sea-lover’s image, at least, this sea-lover anyway.The beaten-steel grey-green of the Atlantic, Mananán Mac Lir howling and driving his chariot led by his white horse, Aonbarr of the Flowing Mane.

I shot some brief video above the pier, but with nowhere in the deep cliff-edge grass to anchor the small tripod and the wind buffeting me, I had to keep it short. I took also some video on the waterproof camera, but I haven’t reviewed it yet.

I moved into town, but got no good images at Ladies Beach. I’d gone through most of the lens wipes in my camera bag trying to keep the lens clear.

The town end of the Promenade and seawall is always popular during onshore storms, waves breaking on the wall, and you can get close enough for reasonable photography because there’s a nice dry spot right at the end of the prom. This time I didn’t spend too much time on the usual photos from here, and focused on some other stuff, life a father and son running and laughing and racing the spray over the wall. And the spray itself. I got really lucky on this one.

I went around the prom and onto the beach beyond the Surf Centre for a contrary view with the town providing the backdrop. I still miss the yellow and red of the lifeguard centre, the white roof is characterless.

I wish I’d been able to wish Hook yesterday, it must have been fun out there. 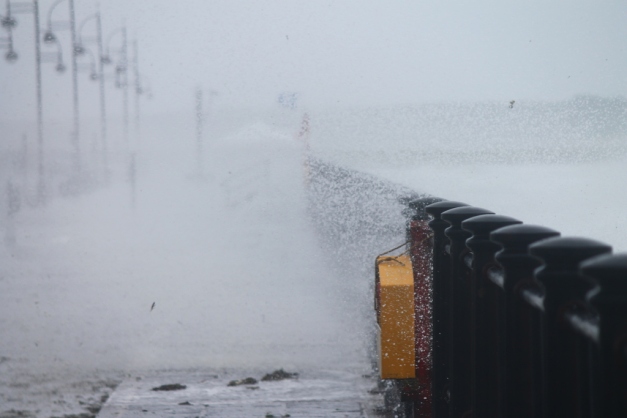 I really wish I were a better photographer, but I’ll keep trying. About 15 good images from 400 is an improvement on my previous rate of 1%. I have high resolutions of these images, if anyone want to purchase any by the way.

If anyone cares, someone(s) nominated loneswimmer.com for four categories in the Irish blog awards.

The categories for which I’ve been nominated are;

I’m told the award for the last one is a rubber statuette.

Maybe. Categories are never what they should be. LoneSwimmer.com will pass 150,000 views within a week and that’s not including the direct subscribers. I’ve got you readers, you keep putting up with this nonsense, ergo … je suis tres contente. Thanks again to you all.

7 thoughts on “Summer Storm Force on the Copper Coast”