Back in June after the Cork Distance Week, Owen O’Keeffe, aka the Fermoy Fish, Ireland’s youngest ever English Channel swimmer, suggested a swim in Tipperary’s Bay Lough, up in the Knockmealdown Mountains.

And so it was that the Fish, Dave Mulcahy, myself and Jen Schumacher, visiting Ireland for the Camp from California, met one morning in early summer at the car park two kilometres from the lake, which is at the end of a long boreen (small road).

I never knew the lake as Bay Lough, when I visited it on summer Sunday afternoons as a child. It was always the haunted lake, the bottomless lake or the Vee lake. The Vee is the scenic drive up through the Knockmealdown Mountains.

The lake is a glacial corrie, scoured out of the mountains during one of Ireland’s regular glaciation periods, the last of which ended 18,000 years ago. There are stories about the lake the two of which I had remembered was that it was allegedly bottomless, and that no-one could swim across it.

Both superstitions seemed reasonable to a credulous teenager, even though the lake is modest in size. The lake and environs are very scenic, in a grim desolate way. I clearly recall on every visit how my father would try to skim a rock across the lake, never succeeding. Never did I see anyone swim in it, not even my Dad, no stranger to doing stupid things outdoors himself, a trait I seem to have inherited. 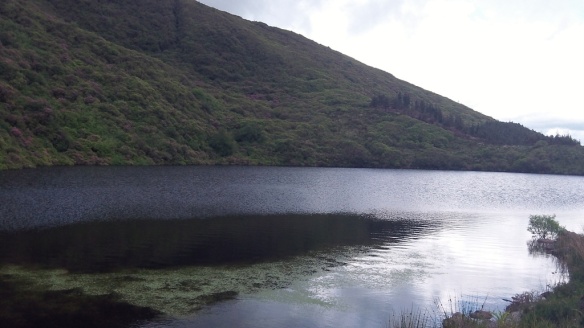 It’s a pretty small oval lake, maybe four hundred metres on the long axis, two hundred on the short axis. The pass looks down on the Golden Vale, valley of the Suir river, often said to be the richest and most agricultural land in the world.

The Golden Vale, Slievenamon mountain in the distance

The mountainside is covered in rhododendron which blooms in late May and early June and can be pretty spectacular, if you ignore the fact that it is an invasive highly aggressive bloody big weed. Mountain lakes tend to be a bit colder than the lower ones, the temperature was about 9 or 10 degrees Celsius. The water is dark and peaty from the mountain run-off, and underneath it’s black as pitch, the blackness that inspired the legends of bottomlessness, and the cold dead hand of the poor drowned Colleen Bán, with whose legend I tried to scare Jen. Channel swimmers aren’t easily scared.

There’s a misogynistic legend about Petticoat Lucy, the Witch of Bay Lough that’s worth reading, just for the context. This bit though is true: “If you were ever to visit the lake itself you will be struck by the feeling of loneliness that surrounds the area.”

A nice little swim. No legs were grabbed by the cold dead hands of the lost souls of the lake.