I came across this article on 25 signs that you might be a marathon swimmer, by Steve Munatones, on active.com because of a sudden slew of mentions of the article on Twitter. I think it was written some time ago, but I’m not sure.

I thought I’d see if I had the potential to be a marathon swimmer. 🙂

1. Your favorite author is Lynne Cox.

Lynn Cox wrote a famous to swimmers autobiography of her life and adventures in long-distance swimming. She isn’t my favourite author, I read too much, but I understand the point. And of course I have the book.

2. You have four jars of lanolin in your car.

Alan Clack brought in 1.5 kilograms of lanolin in two jars from Canada for me when I was running out last year and worrying about the national shortage that non-one was taking seriously. I’ve got sufficient for about  four years now. (I gave Gábor a tub after I wrote that sentence). No, you can’t have any of mine.

3. You equate the sight of neoprene with someone scratching their fingernails on a blackboard.

I recently felt compelled to write a haiku about neoprene for myself while I was swimming skin in 8 degree water. Yes, you’ll probably get to see at some point in the future.

4. You are Facebook friends with 36 of the 49 Triple Crown swimmers.

I’m not on Facebook but I sure know many of them, whether personally, through email, or through the marathonswimmers.org forum. I’ve even collected autographs!

I fail this one. Ocean’s Seven has not been a dream of mine.

6. An email from Philip Rush is like winning the lottery.

I remember the excitement the first time I got copied on an email from Ted Eriskson. And Penny Palfrey. And Anne Cleveland, Scott Zornig, Dave Barra, Chloe McCardel, etc. Steve Munatones was the common point of origin for many of these emails. Lisa Cummins is one of my friends, Kevin Murphy sent me Christmas wishes and Steve Redmond rang me for a chat this morning. Shameless name-dropping!

7. You know the components of Maxim.

It’s just maltodextrin, aka rocket-fuel. I recently saw someone write somewhere that there is protein in it, which there isn’t. If you want the definitive discussion of maltodextrin in swimming, Evan’s blog is the place.

8. You feel like you’ve been to Sandycove even though you’ve never visited Europe.

Well I guess that’s obvious. Owen and I were talking recently and I reminded him of the Sandycove AGM a couple of years ago. I’d just created the Sandycove website and I wanted everyone to start pushing awareness of the website as the introduction to one of the world’s great open water swimming clubs, whenever they could, email signatures, forums, blogs etc. Almost everyone looked at me like I was mad. Two years later …

9. You read Donal Buckley‘s blog first thing in the morning.

That’s quite gratifying, and thanks to Steve for that comment. My blog, a sign of mental aberration! LoneSwimmer.com is three years at the end of this month, by the way. For the first time in my life I have a nickname. Well, one that can be repeated on polite society. I do not yet refer to myself in the third person though. Sometimes it’s really hard to come up with new stuff, when it’s the depths of winter, there’s not a lot to report and the time in the water is too short to be very inspired. My 2012 photos have helped recently.

10. The MarathonSwimmers Forum is your favorite online property.

Again, this is great. marathonswimmers.org is becoming what Evan and I hoped, a real online meeting place and discussion and argument place for the world’s marathon and aspirant marathon swimmers.

11. For you, single-digit swimming is doable, not dangerous.

Single digit swimming is bloody unavoidable if you want to be an open water swimmer in Ireland or the UK. I know enough to know there’s a huge difference between 9 C and 5 C.

12. When Mike Oram speaks, you listen.

I do indeed read everything Mike Oram commits to the Channel chat group. (I don’t agree with it all though).

13. When you see a body of water, you wonder what the water temperature is.

I don’t really wonder about temperature of bodies of water unless I am actually going to swim in them. Is that a yes or a no? I just assume there are all cold, it’s easier.

14. When you see a body of water, you Google it to see if it has even been swum.

Google Earth is one of the great modern additions to marathon swimming, and I wish to hell Google would update the entire Irish coast in full resolution, especially the bit around Dungarvan.

15. & 16. Your first question upon landing in San Francisco is, “Where is Aquatic Park?”. You know the difference between the Dolphin Club and South End Rowing Club.

I know where Aquatic Park is (though I haven’t swum there). And La Jolla in San Diego (I have swum there). I do feel my swimming Curriculum Vitae is somewhat remiss by not having a South End membership on it. Yet.

I’ve swum 27,000 metres in the pool with The Magnificent Seven and then we’ve gone immediately to the sea and swum in 7 degrees Celsius water. That one sea swim is what led to my reputation with Coach Eilis as being reckless. 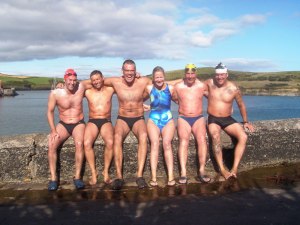 18. Swimming extra on holidays is a given.

Isn’t swimming what holidays are for? A better way of explaining this is that you are going somewhere where there is no chance of a swim. But you take your swimming gear anyway.

19. You always wonder if you have done enough and stress out when others do more.

My solution to mileage concerns has been to try to swim at least a million metres per year regardless. I still stress.

20. You fret about every twinge in your shoulders.

21. “Nothing great is easy”, is your favorite quote.

Nothing Great is Easy becomes your favourite quote when you’ve earned it the hard way.

I do. I really do. Bioluminescense is the sea’s gift to night-swimmers.

23. & 24. You have considered—many times—how to punch a shark. You know more types of jellyfish than you do cats.

Sharks don’t actually exist. They are faked in the same studios as the moon landing. Jellyfish are a different matter. Those multitudinous feckers. I keep swimming into new types I don’t recognise. When did I ever think I’d start to recognise different species of jellyfish?  Are there more than two kinds of cat; nasty and more nasty?

25. You diet to gain bioprene.

Well, do I pass? Can I become a marathon swimmer?

7 thoughts on “25 signs of being a marathon swimmer”