In the weeks since I published the article of the despoiling of the Guillamene Cove by the addition of shoulder-high stainless cattle-crush, meetings have been held between Newtown & Guillamenes and Tramore Town Council and radio and newspaper interviews have been done. Many people read that article. (A couple of people have told me I was the “public face” of the Guillamenes, though I think they mean my swim box, which far more people know than me).

A Facebook Protest Group has started (regular readers will know I don’t do Facebook). There’s been a physical protest at Tramore Civic Offices. Oh, and I paid my annual Newtown & Guillamene club membership.

It’s not all unanimity on the protest front. Club members have been verbally abused by people protesting the change. People who are never actually at the Guillamene. In one case one of the senior club members was insulted in the street. When he asked the abuser how long since the protester swam at the Guillamene, the answer was 10 years. Looking through the names of protesters, what’s noticeable to myself and many of the actual club members, is just how few of the protesters are known to us from the coves. This is indicative of protest in the age of Facebook. I think people click [Like] to feel they are doing something, making themselves heard, when it fact it’s a fairly meaningless action which certainly doesn’t impress the people who actually get out and do something. Facebook Likes mean less than a five-minute swim at the Guillamenes, and far far less than being a club a paying club member or helping to keep the area clean or reporting behavioural problems, or stopping people engaging in dangerous behaviour.

I’m far more impressed by people who are completely in favour of the cattle-crush, but who actually swim at the Guillamenes. I’m never on the side of bullying and nothing is more likely to lose you your argument than attacking the very people who have put so much time and effort over decades into developing and looking after our swimming coves.

There has also been widespread mention of criminal activity, whether destruction of the crush (which at least hasn’t, yet, happened) or theft of the railing by “scrap metal thieves”, a relatively recent Irish phenomena.

The Stewardship of the Guillamenes is the idea I’m keen to keep front and centre. For all the people, local and visitors, who have benefited and enjoyed the amenities at the Newtown and Guillamenes Coves, it should never be forgotten that it is the club which has stewarded the area for all over the past 80 years since its founding at the beginning of the 1930s. For people who’s only real interaction is that [Facebook Like] button, they should remember that the club members, past and present, are the ones who are there most days of the year, tidying up in winter, power-hosing and painting in summer, collecting for local charities, or organising the Snámh Fada, swim gala and diving competitions.

I’d like to do a quick review of the changes:

The Good (in my opinion)

The Bad (in my opinion) 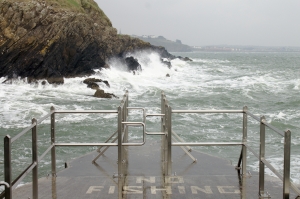 Tramore Council’s argument about the installation of crush is that it received two complaints about safety in 2012 and therefore it was obliged to act before possible future litigation.

One of the main threads of the counter argument to the installation is that new installation is itself unsafe or likely to lead to further accidents, given its height and scale. It’s been pointed out for example that given that height that children can still easily get underneath it, and could still fall. This seem to me to contradict what has been done with the new steps into the water, where relaying the concrete has led to much dis-improved safety as it now provides a far better bed for algae growth and potentially dangerous slips and falls and nothing has been done to redress this problem.

The problem with this argument is the logical conclusion of it is that the current railing would be removed and a solid head high wall or barrier would be installed so that no possible accident can occur. The riposte is that to climb though the barrier would be to enter into unreasonably dangerous action. Yet the sea edge is naturally dangerous. At what point do you abdicate responsibility for your own actions and blame someone else? Like America, Ireland is a notoriously litigious society. That doesn’t mean everyone is so inclined. But I certainly take responsibility for my own stupidity, as I image most of you do also.

It is beyond me how the installation of a simple warning sign of the dangers of the sea front, as is done in Newtown Cove for the dangerous cliff edge, and all along the Copper Coast, for cliffs, current and mine shafts wouldn’t be sufficient.

But the other main problem with the barriers that I have is the unsightly nature and overwhelmingly ugly aspects of them at a location that has been very beautiful for me and others, a beauty that is partly expressed though the fact that so many people have derived such pleasure from the timeless pursuits of jumping into water and swimming and chatting and pursuing that most essential of Irishness with friend, the craic.  They simply don’t fit into the lovely surrounding, surrounding which are partly of course man-made. It is the built environment of the Guillamene that has led to its place in the local and tourist culture. Man-made isn’t bad. What is wrong is a lack of visual or cultural integration of a new safety system into an existing environment. We bemoan the surrendering of Irish culture to the drink and the pub, yet when those of us actually do anything else, the spectre of the Orwellian state raises its head.

A meeting will be held in September to review the changes, with Tramore Council and the “stakeholders“, that perennially popular local government term, which includes the Newtown and Guillamenes  swimming club, a representative of the Facebook group, and will definitely include myself.

In the meantime, abuse of club members, and criminal threats or activity do nothing to advance any purpose and lose the respect and agreement of those of us committed to the long-term enhancement of the area.

The famous Guillamene sign, which the tourists love, has a less-seen reverse side, visible to those who think to look up when leaving the Guillamene Cove indicating that the cove was principally for bathers. And underneath, the Irish farewell: Slán abhaile. Which means; “Safe home“. I think more people need to consider the wider aspects of Slán abhaile.