A long time ago I wrote a post of Third Spacing of fluids and I’ve decided to revisit (and slightly correct) the subject.

The most obvious external indicator that someone has been swimming for an extended time is physical bloating. The person literally becomes swollen. It’s especially obvious in the face which develops a puffy look. This is one aspect of something called Third Spacing of Fluids. The more usual medical condition and cause of Third Spacing is when someone haemorrhages or have been burned. Space is this sense also means location, the medical term of compartment. The first compartment or space is within blood vessels or tissues, the second space combines that with the area between vessels and tissues. Tissues have about 75% of fluid and plasma about 25% normally. Both tissues and plasma are physiologically active.

But the Third Space is the “compartment” or area or space where fluid doesn’t normally collect and is physiologically non-functional. In the of Third Spacing of Fluids from swimmers it refers to the space between the skin and the fascia, which is the fibrous connective tissue under the skin. It happens when a human is immersed in water for an extended time. Water is absorbed through the skin into the intracellular spaces.

Third Spacing can’t really be stopped and of itself is does not impede performance. As I said above that third compartment is non-active. It’s possible that it can be slowed by increasing electrolytes, however in cold water swimming, the swimmer is already taking in a high liquid volume partially for electrolytes but more importantly carbohydrates.

Third Spacing starts within a couple of hours of immersion, and obviously increases with immersion time. It can be slightly noticeable after six to eight hours. It wasn’t readily visible on Trent for example after his record swim, unless you had seen Trent close-up beforehand.

Also, Third Spacing passes quickly. Channel and marathon swimmers will usually need to continue urinating after a swim and urination and vomiting quickly relieve the body of the excess liquid.

Swimmers may have reverted to normal appearance within a couple of hours, (the trip back to Dover from France) and almost look normal within 24 hours, regardless of immersion/swim time. 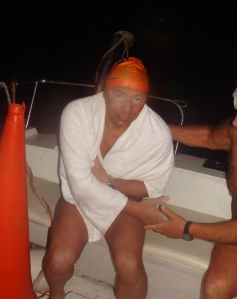 Third Spacing means most swimmers will look much different after a Channel swim often causing non-swimmers to be unduly concerned though there is no need for such concern. Third Spacing happens in both fresh and salt water, though it seems to be more pronounced in salt water.  This is likely partially because of electrolyte depletion and salt water is closer to body fluid.