LoneSwimmer.com reaches a quarter of a million page views this weekend*, and I wanted to thank all the readers, viewers, commenters, subscribers and occasional visitors. It is very gratifying for an average swimmer in the middle of nowhere.

When I started this blog I honestly never expected it to reach such a figure, I never had such a goal or target. In fact I never had any particular target other than a continuing desire to share whatever I’d learned. It took a year and a half to reach 50,000 views and I remember both being very pleased but wondering how much life was left in the blog at that time, (something I still often wonder). And I was also pleased as you know by now to win the Sports and Recreation Blog of the year for 2012, to my very great surprise.  Personally one of the greatest pleasures have been the direct contacts and friendships I’ve made with swimmers around the world resulting from the blog.

Readers come from almost all over the world, though Equatorial Africa and parts of the Middle East seem uninterested. The four regions for most readers are the USA, Ireland, the UK and Australia, with Canada, South Africa, India and the EU countries being the next most common origin. Darker colours in the map represent more readers. 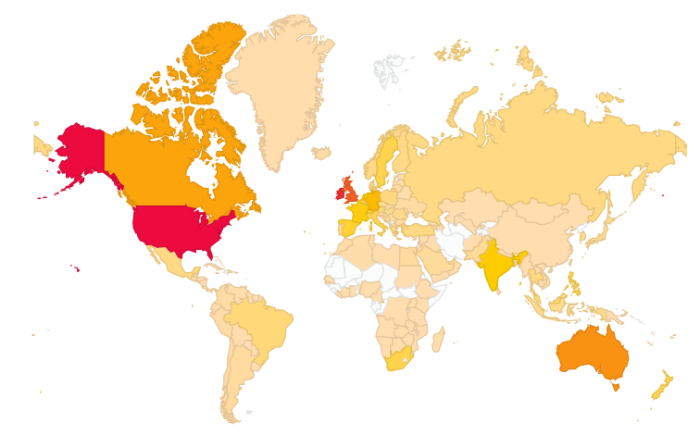 About 700 posts, have been published (some have been removed due to being obsolete…or rubbish). Over 1200 comments have been left, and that’s despite my being sometimes poor at responding, especially in the early days of the blog. There have been over 42,500 SPAM comments! Most SPAMmer are idiots, but not are all and those few can confuse the SPAM filter, and the sheer volume means that occasionally a genuine comment or question will get caught in the SPAM filter & I might not see it for months. My apologies if this has happened to you and if I never responded it probably means I missed it entirely.

The most commented post is Introducing a Precise Open Water Temperature Scale, which is also the site’s third most popular post. “What temperature is too cold to swim in”, and the amended version of the same being the most popular posts, ongoing.

Apart from variations about cold water swimming, the most popular search is for Sea Lice, a continuing problem for open water swimmers around the world, and which seem to increase in volume in spring and late summer of both hemispheres. The incoming searches can be very varied. I see people who have plugged in the entire question from their homework verbatim, or others looking for images of some of my swimmer friends in bikinis or even naked. And those friends don’t have to be women!  Someone wanted to know if a dog can swim the English Channel and there are other occasional odd ones. How to get water out of your ear is perennially popular (I still prefer the hop up and down on one leg as my preferred method, for the jovial aspect at least). 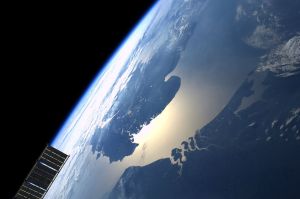 Quite a few people visit because of images here, such the English Channel from the International Space Station, European Space Agency’s Grid Waves, (which caused a huge influx of traffic recently after it got shared around on Facebook, many thinking it was a fake). Other very popular images include the depth of the ocean to scale (look very carefully at the bottom of that image) and lot of people click-through on this image!  Also images for Jellyfish ID, the Training Zone chart, different types of athlete’s bodies, understanding waves, and how waves can interfere with swimmers, understanding prevailing winds are all popular, often or maybe even usually amongst irregular swimmers. My open water swimmer’s brain cartoon has escaped in the wild also.

The HOW TO series is continually popular, which is why I leave the link up there on top, and those How To posts tend to be the ones I most like writing since they are at the core of what I am trying to do. (I really need to organise an index for them). Interestingly theraband work for shoulder strengthening is the most popular of those, with the annual cold water swim advice for irregular swimmers being the second, and the next three are all on the subject of understanding and addressing hypothermia in swimmers. There have been three different April Fools joke, which have caused varying levels of consternation (2012 & 2013) or even panic (2011) but have always entertained…me!

In comparative terms to loneswimmer.com, marathonswimmers.org, which Evan and I founded early last year, is coming on 600 members and has page views coming up on half a million! Are you a member yet? The power of community is always stronger than one person’s views.

So there we are, a quick overview and Thanks to you all!

Sometimes we are all lone swimmers, and everyday is the Channel.

{* In fact since quite a few people receive posts by email and aren’t recognised in the overall figures, the number was passed a while ago. In order to so some site housekeeping, email updates will revert to summary only for the moment and you’ll have to make a one-click jump from email back here to read the full article.}

14 thoughts on “Everyone is a lone swimmer”