Real spring arrived most tentatively and late in Ireland this year, following the coldest early spring in 50 years. The water has been cold at its usual lowest point in late February, but recovery from the bottom took longer to occur than usual and many of the coldest days swimming have occurred after the normal coldest point of the year.

My swim times have stayed short, shorter than in a few years, swimmers have widely been commenting about the combination of cold water and cold air making weekend open water swims difficult and brief, not complaints often heard amongst Ireland’s experienced cold water swimmers.

But finally, only two weeks, the northerly air flow shifted away and temperatures moved about low single digits.

This prompted my first visit of the year to Sandycove. How did it get so late? Only a week previously the water temperature in Tramore Bay had still been only seven degrees, but the Sandycove visit provided a lovely ten degrees. Having been ill with a chest infection for a few weeks, I’d approached the swim with slight trepidation (the only time I’ve ever thought I might have a problem with a lap) but on measuring the warm water that concern disappeared and Owen, Dave Mulcahy and I each cruised around for a pleasant sunny lap, Owen being faster was first around and utilizing his new Finis GPS for a map of a standard high-tide island lap. Some chat was had afterwards, with Mike Harris and Ned Denison out for a visit also. Ned indicated that he wouldn’t be integrating my suggested Copper Coast swim into this year’s Cork Distance Camp, “as it doesn’t suit“, whatever that means. I’ll just have to get some of the swimmers over myself!

Saturday just gone was also a mild sunny day, with light fresh northerly breeze not being too cold and therefore ideal for jellyfish-hunting. This is what I call my early spring loops of Kilfarassey’s Burke’s Island. I abandon Kilfarassey’s playground except for beach walking during the winter months as its southerly aspect is too exposed for the depth of winter and I can look forward to returning to it with increasing anticipation as spring progresses. With a light offshore and a sunny sky, the island, whose nearest point is only about ten minutes away, looked inviting. The tide was low, just off a spring and the guard-line of reefs that separate the island from the mainland were showing. 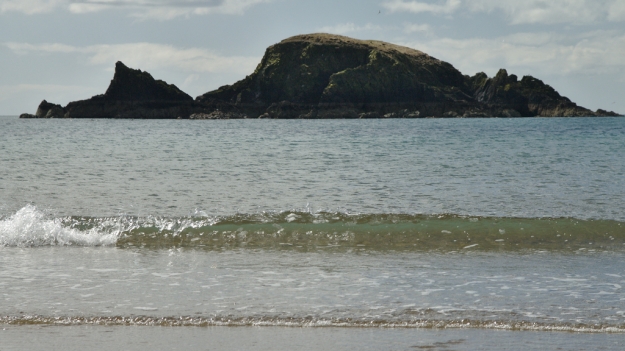 I was concerned that Waterford’s deeper and more exposed water, almost always colder and slower to respond than Cork’s, despite being only about 60 miles apart, would still be only seven to eight degrees, but it was also ten degrees in the sun-warmed beach-edge water of Kilfarrassey, I doubt the Guillamene’s deeper water would have so improved.

It’s a shallow entry, and as I waded in there was a horse being ridden out in the shallows, the rider looking askance at me. The island and a string of reefs protect the beach, but once past the half-way point of the island the water depth starts to drop and I swum counter-clockwise around the outermost reefs, stirring up all the sea-birds who are far out from the mainland and therefore unused to much human traffic excepting the occasional kayakers or local fisherman. As I passed the island the temperature gradually dropped, and I guess the water around the island was about nine degrees. 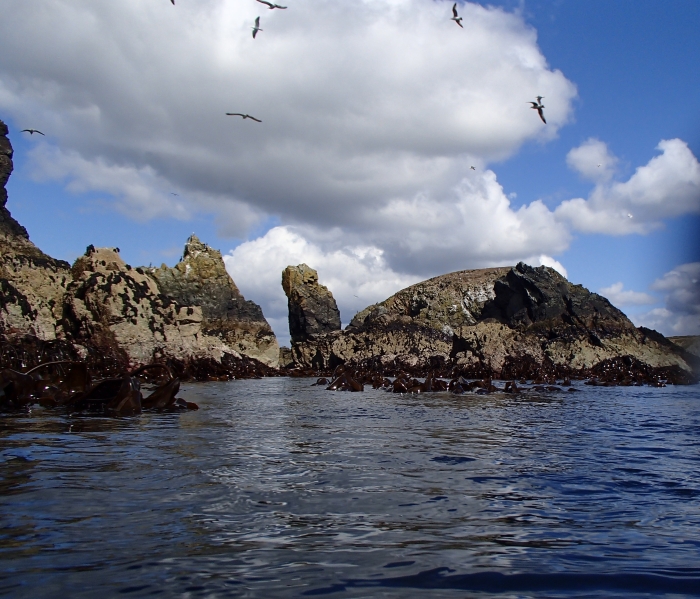 The channels at the back of the reefs & island – my playground

Apart from the main island, there are actually lots of reefs and rocks and I swam into the main channel at the back of the island through many of these, my secret playground. The tide had now bottomed and heavy kelp was visible above the water. The first sea-anemones I’ve seen this year were visible on a couple of the deeper rocks and the water was crystal clear.

And what would a day to Kilfarassey be without a swim through my favourite arch, which I’ve termed the keyhole, about 25 metres long and always fun even on a calm day, though narrowest at low tide.

Kilfarassey is the location where I see (and suffer) jellyfish the most, it’s exposed and deep enough with enough calm pockets, reefs, currents and caves to hold many of them in place, but there were no jellyfish this day. The first jellyfish scouting expedition returned without a single one encountered, but it won’t be long now before our annual battles begin.

The swim was only forty minutes. But forty minutes of cold, clear heaven. Forty minutes where for the first time in weeks I felt I was where I was supposed to be, the first place where I’d felt truly and utterly free for some time, when I remembered that I started this blog over three years ago by exhorting you all to seek freedom. I write about the safe way to swim, the educated way to swim and I write about the mechanics. But it is this sense of freedom that is so essential for my own psyche and so fundamental to my own reasons for swimming. In the water, outside the island, over half a mile from the mainland, that I am ineffably myself and in that place of so little control that I feel so much confidence.

11 thoughts on “Spring is swum”