In the original Star Wars A New Hope movie Harrison Han Solo Ford famously said that the Millennium Falcon had “made the Kessel run in less than twelve parsecs“. I still remember how annoyed I was, because even as a kid I knew a parsec was a measure of distance, not of time. (No thanks, I don’t need any tortuous post-hoc technobabble explanations of why this may make sense).

I seem to be oscillating in and out of some kind of swimming burn-out for about a month now though it’s possibly just the annual end-of-summer slump.  I still love the sea, still get excited or interested in swimming a couple of hours somewhere new by myself, or looking forward to maybe one more long open water swim before the end of season.

But I hate the pool even more than normal, and have repeatedly found myself unable to swim a simple thousand metre warm up and when I can, I swim slower than I’ve swum in years. I’ve had shoulder pain worse than I’ve had in four years for a week and after eight consecutive years, I cannot find any reason to swim the Sandycove Island Challenge or justify the relatively high cost of entry, though it’s usually the mile distance highlight of the Irish swimming calendar. I even missed a Sandycove night swim that I’d suggested and a Ballycotton to Capel Island first time swim with Eddie Irwin, Carol Cashell, Finbarr Hedderman, and Liam Maher two days later, the first time I’ve ever missed one swim, let alone two, due to injury or illness (not that I haven’t swum while ill or injured).

A casual comment by another Channel swimmer led me back to my other magnum opus. Not this blog, but my training log. I’ve been logging all my swimming and related data into a spreadsheet since 2008. Each year I add something new, it’s got multiple sheets and fields and even some charts but at its most basic and original it’s a simple record of how far and how long I’ve swum.

I looked at the cumulative distance since 2008, and discovered that I was just a few tens of thousands of metres short of 8,000,000 metres. It was such a simple thing that I’d hadn’t thought to check. 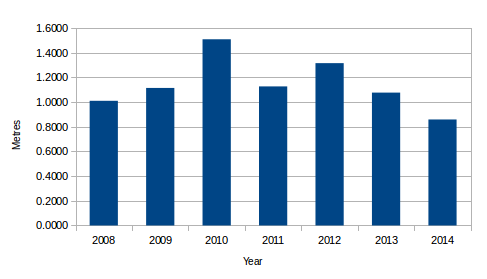 By the end of the year, I’ll have swum the equivalent distance from County Kerry on Ireland’s south-west coast to San Francisco.

You think I’ve have something useful to say after all or about all these metres. Apparently not today. I guess this site will have to substitute as some evidence instead.

The longest time off I’ve has been after my Channel injuries in 2010 when I was (mostly) out of the water for about six weeks but I still wanted and managed to swim the Island Challenge with a barely functioning left shoulder.

So I can’t be overtrained, since I’ve been doing this for years and I’m well adapted. Some weeks later now, I’m finding it hard to motivate myself to swim much at all, except a few three or four kilometre easy sea swims a week.

Which brings me back to Han Solo’s Kessel Run. A long time ago, in a life very far away,  I objected because George Lucas incorrectly measured time using distance.

Does it make me the Han Solo of open water swimming if ironically,  I now find I can do the exact same thing?

I’m not sure I could even tell you why, if you were to ask.

Somehow, my life has become measured in metres.

7 thoughts on “Measuring life in metres”

Leave a Reply to Sound of Jura Silkie Cancel reply