“On behalf of the President and people of Ireland, I’d like to welcome you to our shore” said the Newtown and Guillamenes Open Water Swimming Club President to me.

The gentleman speaking was the eighty-five year old who has been swimming at the cove for over seven decades and the man who probably invented the original Ice Water Bucket challenge, Billy Kehoe, looking down on me from the platform as I climbed the steps in the bitter northerly wind from the brutal six degree water, removing my earplugs and slipping on my fake Crocs. Eighty-five and he towers over me and is always better dressed. 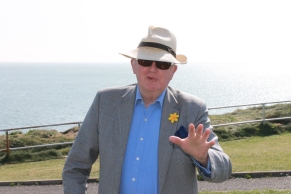 It’s one of Billy’s favourite quips … and one of mine. I have to admit that it really does give me a not-so-secret-any-more thrill, (and is one of the few times I am actually at home in this country, from where I usually feel outcast). The chance that Billy will arrive just at the moment I’m leaving the water is pretty slim and it has only happened a handful of times over the years. More usually when we meet Billy is there before I get in the water, when he repeats another favourite quip for me “I forbid you to swim past the Saltee Islands“. Which I’ve heard far more frequently and to which I usually retort that he needs a new joke. (The Saltee Islands are about forty kilometres away).

When I bring the occasional swimming visitor down to the Guillamenes on a summer evening, I always hope we will meet Billy, who sometimes visits the cove later in the day, sitting with his mate Frank (Nolan, President of the Local Inshore Rescue and another open water swimmer of some decades) on the bench overlooking the bay.

I introduce the visitor to the two Presidents, to which Billy usually replies, “there’s no need to genuflect“. Despite the fact I’ve introduced Billy to a dozen or so Channel and marathon swimmers over the years, he accords me some special status: “You’re not a man, you’re made of iron. Or half-iron, half fish.“. I know it’s not true, and so do you, but when someone I like and respect so enormously says something complimentary, I’m like a kindergarten child glowing in a teacher’s praise. 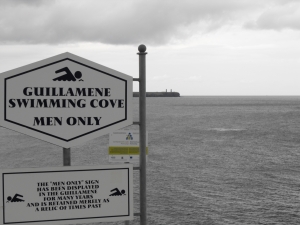 The Newtown and Guillamenes club came into existence informally in the 1930s. In the 1940s Billy and some of his friends became more organised and with the support of a local businessman and a risky loan from the bank of a thousand pounds, (quite a large sum then), the steps down the cliff and the concrete platform were laid and still exist, refreshed or extended occasionally. The loan was repaid within two years. Over the subsequent decades the club grew. The traditional Men Only nude swimming, common to the oldest Irish open water swimming clubs only disappeared in the 1990s, (but before my arrival).

Unlike Dublin’s famous Forty Foot swimming location at Sandycove (famous for appearing in James Joyce Ulysses, and which only allowed women to join last year!! and not the Sandycove in Cork about which I often write), the Newtown and Guillamenes club didn’t need a court-case to allow women to swim. For a few years afterwards a few of the older men, including an Archbishop apparently still swam nude. No court case held, no psyches damaged and no-one particularly outraged. Fifteen years or so ago, the club cabin was put in place. Work has continued around the entire location, lawns, picnic area, car park. People have died in the cove. Judging by the odd condom spotted in the car park or even in changing alcove, some may have been conceived here. The 50 steps down to the Guillamenes cove have been relaid, rails have been lost to south-easterly storms, replaced and lost again. The diving board in Newtown cove was removed but the Guillamene board remains, one of the few in the country. The coves are part of local tradition and life, during the summer enjoyed by thousands of people, local and visitor. 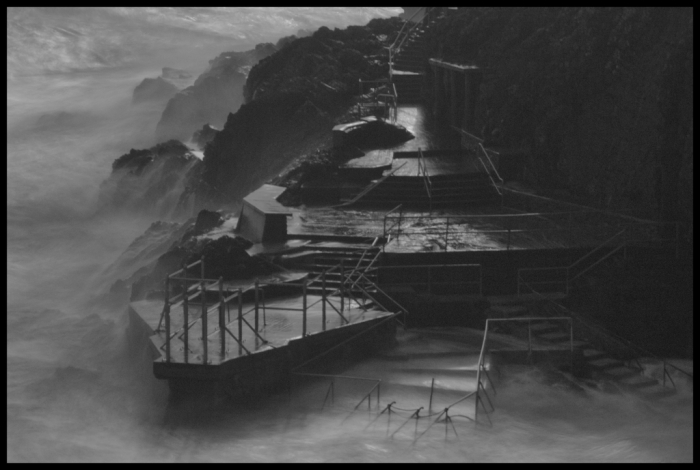 It’s sounds almost dismissive to glide in a couple of paragraphs over the decades and the many hundreds of club members and tens or hundreds of thousands of people who have enjoyed the location because of the engagement and commitment of Billy Kehoe and his friends and all the others who came afterwards. And still Billy is present.

Also present this cold morning were other club stalwarts, Eddie (former club secretary and now PRO) and committee members Morris and Joe. I’d met Betty and Maura up in the car park. I saw Paddy walking his dog on the coast road as I arrived. Some others I haven’t met for a few weeks, or months. Joe as always warns me not to swim to far, as I have “nothing to prove to anyone”. Then when I ask, he quotes the wrong temperature, too low by a few degrees as usual (39º F/3.3º C according to Joe). Each of them is a retiree.  I am the youngest present and I am not young. Each of them swims year round. None wear a wetsuit. Some loop the small cove, some just swim from one ladder to the other. If the day is too rough, or they aren’t feeling well, that’s fine, they’ll swim tomorrow or the next day possible. Afterwards they’ll retire to the cabin for a cup of tea and a chat or maybe even a small one. If they are already in there when I arrive to swim, I am like an eager child anxiously jumping in to join what the real adults are doing.

On the cabin walls are scattered photographs of club members present and past, a framed ticket for the annual “dinner dance” in 1942, even a photo of mine. The cabin isn’t a shrine though. It hasn’t been there long and it’s mostly a living and used space. There might be an empty whiskey bottle beside the bin, or a bicycle or a parking cone. Mostly it’s just a few people having a chat. Every one of them present and belonging, club member or friend. Each year in the autumn the club holds a Mass in the cabin to commemorate decreased members. Thirty to fifty people cram impossibly into the tiny space. Swimming friends are remembered.

Billy knows the smoothness of the stones in the cave of the lone swimmer. Morris knows the difficult tides in the bay. Eddie knows the south-east wind. Each of them knows this place, each in their own way has lived in this place. Each is part of a continuum that we all hope will outlast us.

I remember the article I read just that morning which said open water swimming was becoming trendy. But on a bitterly cold and grey Saturday morning at the start of February, at the east end of Ireland’s Copper Coast during the toughest swimming month of the year, when there is no-one present but these people for whom cold water swimming is so part of their lives they never think to even discuss or write about it, when a rare tourist may stop to ask incredulously if we are all mad and “actually going to swim in that?”, there is happily, no sign that open water swimming is in much danger of becoming trendy.