Back in the spring, when the water was at its lowest point for the year and therefore not conducive to test swims with the purposes of reviewing equipment, well-known and reputable UK open water swim organiser (including I’ve heard the London Olympics 2012 10k swim) Colin Hill contacted me to ask me to test out some products from his range of ChillSwim tow float buoyancy safety aids.

Colin sent me the standard Tow-Float, the Tow-Donut and one of the Inflatable Swimmer’s Dry Bags (28 litre capacity I think) all in the lurid orange that is the best choice of colour for open water visibility (I always a similar-coloured swim cap) and I’ve tested them out in swims of various duration over the past few months. 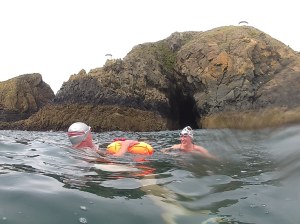 The standard Tow-Float is the smallest of the products and its primary use is to increase visibility of the swimmer. It’s useful for open water swimmers who are concerned with visibility from the shore, from marine craft and who wanted the added mental security of having a buoyancy aid on which to briefly rest.

Personally I do not think anyone should be stepping into the water if they are concerned that they are insufficiently prepared to be able to swim consistently. I also think the idea of resting in cold water is itself dangerous.

All Chillswim products inflate easily (once you get the first lungful of air in, which might require  bit of an initial hard blow) and even the small Tow-Float will provide sufficient buoyancy for a swimmer to rest on, though in the cold waters of Ireland and the UK this isn’t something I advise. Each product comes with a short leash and an adjustable nylon clip webbing belt. The float is pulled along behind your lower back and doesn’t get tangled in your feet, (unlike previous home-made tow ropes I’ve used for pulling feed bottles). Colin points out that for the very popular UK Coniston Lake 5 mile Chillswim event, up to 700 entrants all wear a Tow Float, which he feels greatly enhances the safety of the event for the organisers and swimmers.

I’ve used the Tow Float in a range of conditions up to quite large waves but never for more than hour. I expected, as most of you who’d never used one would, to feel the drag from the float, but it was negligible. For myself, like most distance swimmers, most swims will go in at least two directions. Swimming into the wind or choppy water the float was at worst barely noticeable. However, when swimming with the wind from behind, I found the float would be blown forward and tangle with my arms. If you are swimming in a less wind-prone location this may not be of concern, but I found the standard tow float to be uncomfortable in this following-wind situation. The visibility aspect of the the float is considerable for safety from marine craft, and visibility from shore. The Tow Float is priced £19.99 (€27/$30). 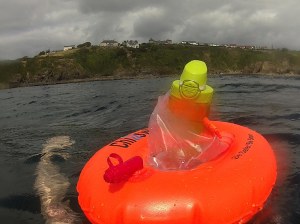 The Tow Donot is a similar diameter (4 cm larger) but instead of a single bag itis an inflatable ring with a small dry compartment in the centre cavity. The size is sufficient for car keys, wallet, phone and a snack. This Tow Float stuck me as more useful. Many people are concerned about storage of personal items while swimming, especially wanting to bring their car keys with them. I tried out the Tow Donut on a longer swim, using it for a two and half hour swim on one occasion. I was able to squeeze a full OTG bottle and my GoCheap camera in housing into it. I wanted to see how the increased weight would affect drag, the susceptibility to varying wind direction and also if there was any chaffing from the nylon belt. It passed all three with flying colours. The increased weight didn’t increase the drag perceptibly, but it did help stabilize the float from being blown forward. I encountered no chaffing around my hips. It’s a good solution for bringing valuables with you and for being able to get access to a camera or feed during a swim. (The cavity isn’t large enough for a DSLR camera). If you are doing lots of multiple hour open water training swims, I recommend the Tow Donut highly for simply having easy access to feeds without having to exit the water and get cold and without having to do a lot of fiddling during a swim. The Tow Donut is priced £25.99. (€36/$40).

The Inflatable Dry Bag is as the name suggest. It uses a standard dry bag foldable closure to keep items inside completely dry, but has the added facility of being capable of being inflated to allow you to tow even more gear along with you. Depending on the size chosen, you could take clothes, footwear, valuables and towel. For swimmers in congested areas, this is likely an ideal solution to avoid theft or interference with personal items. I didn’t try the bag out fully loaded for a swim but it did survive the ultimate test for me. It fell off a kayak into the sea while holding my DSLR camera, which came out of the encounter bone dry. The inflated bag also affords extra shock protection but of course inflation will reduce capacity, so put the contents in before inflating. Unlike the Tow Donut thought, you won’t be able to open this during a swim without flooding the inside. This bag is good for swim adventures. The 28 litre Inflatable Dry Bag is priced £27.99 (€38/$43).

Increasing visibility in water, especially in areas with marine traffic is a good safety tip. It’s less important for me, as I feel that in my location that by increasing my visibility to shore, I increase the chance of someone on shore, without the experience to evaluate that I might know what I am doing or asking one of the locals, panicking and calling out the Coast Guard, (this having happened a few times). I am also concerned as always with the substitution of technology for experience or relying on it instead of knowledge and measured and evaluated safety decisions.

That said, being able to bring feeds and/or valuables along on a swim is a concern for a lot of people.

All the products are well made. The vinyl will require the care needed for any inflatable vinyl product, but I’ve been carrying them around in the back of my car for six months with no undue care, not stored specially and all are puncture free. The nylon strap is easy to open, secure and robust without being irritating.

If I was to recommend just one of the three items for utility and value for money, it would be either the Tow Donut or a larger capacity Inflatable Dry Bag, depending on your need. If you are doing long distance training or unsupported swims, then the Tow Donut seems to be the best choice and I wish I’d had one years ago.