1. While there is debate amongst experienced pool swimmers about the crime of peeing the pool, (some don’t do it, some do and they are wrong!), there is no similar among debate amongst open water swimmers. Everyone pees in the sea. However some people may find it difficult to initiate, especially in cold water. If you see a swimmer stop swimming and gaze into the distance while treading water with a scrunched-up look on their face, they are trying to pee. Open water swimmer’s swimsuits get pretty skanky.

2. The clothes that an open water swimmer reserves for post-swim are not chosen for elegance. Salt, sand and most especially lubrication like Channel grease or petroleum jelly are impossible to remove by towelling or simple showering after a swim. Pure lanolin is 100% fat (Channel grease can be up to 90% lanolin) and while it goes on transparent, any moisture, turns it white. Post-swimming lanolin and Channel grease destroy clothes and practically require the swimmer to degrease themselves. (I shower using dish-washing liquid if I’ve been using Channel grease).

3. Everyone swims in the wrong direction. While sighting and swimming a straight line are skills that must be learned and improved, once you have mastered them … you will still get lost. Even professionals make mistakes and Olympic open water swimming medals are won and lost by slight deviations in direction. The rest of us, regardless of our experience, will swim into blind gullies, bang into kayaks, crash into rocks or even swim 180 degrees in the wrong direction. (I did all of these in the last swimming season).

4. No matter how much you learn about the sea, the weather, the tide, the local conditions and take all the safety considerations into account, a day will come where you are in a situation that has gone wrong. All you will be able to count on when that happens are your ability to stay calm and your training. This is why you train, not just for a single swim or target, but to develop a physical and mental base on which you can rely when the need arises.

5. As an open (and warm) water swimmer a shark you should be afraid of that you haven’t heard of is the Cookie Cutter Shark. And while as cold water swimmers we like to dismiss concerns about the Men In Grey aka fish, here’s a list of the Ten Most Dangerous Sharks to humans. But the real things open water swimmers should be most afraid of regardless of water temperature are sewage outlets, boat propellers and jetskis.

6. No-one swims to France by accident. In marathon swimming there is good luck and bad luck, often on the same swim. While bad luck can absolutely stop you from being successful, good luck by itself will never be the main reason you succeeded. Successful swimmers succeed based on their preparation, training, mental strength, and the support of their family and friends.

7. I’ve mentioned it before but I still get asked: So yes, long distance swimmers poop in the sea. Not often and not by choice. There are two primary guidelines. 1: Make sure there is no-one swimming behind you. 2: Make sure you are not coming back the same way. Cold drives the urge similar to how it drives the urge to pee, by increasing blood pressure.

9. Everyone hates cold water. No matter how much they say they love it, they hate it also, usually on the same day.

10. Fraud, deception and corruption are more common in open water (marathon) swimming that most people realise, even most marathon swimmers. I derive this assertion from the information I receive off both this site and the MSF forum, but I can say that the sport is not as pure as I originally and naively thought. Diana Nyad may be the most high-profile current case, but fraudulent swims goes back to the early days of the sport and still continue. The assertion that there is no real money to be made from marathon swimming as a riposte neglects the fact that people will defraud and lie for reasons other than monetary gain such as ego or some measure of fame. One aspect, the swimming equivalent of “stolen valour“, are swimmers who mislead others (and do it over and over), the most common example being Channel relay swimmers who either call themselves Channel Swimmers or carefully parse their credentials to pretend they are soloists. For those genuine swimmers who say they are not interested because it doesn’t affect them, I’d point that every fraud devalues their own swim and damages both the reputation and the future of the sport by implicating us all. Not all corruption is solitary either. Organisations can knowingly support questionable swimmers or officials, or act in a manner that is a conflict of interest that wouldn’t be tolerated elsewhere.

11. Insufficient or incorrectly applied lubrication can cause chaffing so bad that your entire skin can abrade down to the sub-cutaneous layer. Forgetting to grease up is a mistake you usually only make once.

12. Salt mouth, the build-up of salt and salt abrasion in the mouth can get so bad that some swimmers on very long swims can lose the entire surface of their tongue and be unable to eat solid food for days.

13. When it come to feeding during marathon swims, no-one, regardless of what they claim or have swum, really knows what they are doing. The best have prepared by widely testing multiple options during multiple swims and have significantly reduced potential problems. But the science and lack of study of nutrition during marathon swims coupled with the variability of individual metabolism means we still have insufficient scientific knowledge to claim we know what we all should be doing.

14. When you are swimming over waving forests of vivid green spaghetti-thin kelp, you are probably swimming in an area with a sewage outlet.

15. Open water swimming can be an expensive sport. If you live by the coast or a lake, and don’t have to travel, you can keep costs low. But add in travel, pool training, more equipment, outdoor and winter clothes for the cold water swimmers and it all adds up. And then you might decide to target one of the big swims. If you live outside the south-east of England, you can expect to pay over five thousand pounds (US$7000) in cumulative costs over the year leading up to and including an English Channel swim (2015 costs). 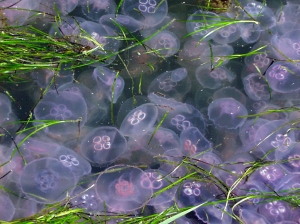 16. Jellyfish are essentially immortal and probably due to overfishing are on the increase. Yet they make movies about zombies. Huh.

17. Raising money for charities can have negative effects. Nothing is more expected these days than that the practitioners should raise money for charity. Indeed that the reason to pursue something like an open water swim must be for a “worthy cause”. By worth they mean extrinsic. Swimming for your own intrinsic reward and achievement and development is inconceivable and considered selfish. Some swims are increasingly out of reach of swimmers because of the charitable donation required and for experienced regular swimmers, you cannot keep asking for donations when they know that the challenge is well within your capability based on your experience. Another consequence is the growth in one-way Channel relay teams reducing the number of available tidal slots and pilots, as pattern that is continuing to increase year on year.

19. Nineteen degree Celsius (or above) water is not cold at all. Ever. Neither is 15 to 18 degree water, but the rest of us are willing to make a grudging exception if you live somewhere stupid-hot. But the next Australian that tells me 14 degrees is cold is a wimp and a sissy and I’ll fight ’em in 7 degree water. Cold water is not Kryptonite and you are not Superman.

20. Excess fat is just excess fat. It’s not a “natural talent” for open or cold water. The sport of open water swimming is becoming consonant with being seriously overweight.

21. Warm drinks after a cold swim do virtually nothing to physically warm you up, as the mass and temperature differential between a cup of warm liquid and a cold large body is too great. But your mouth is more temperature sensitive so it makes you feel good.

22. Aside from frauds the most sensitive subject in open water swimming is money or compensation. It’s hypocritically perfectly acceptable to the community as a whole that a small number of designated functions should be remunerated, while equally repugnant that others as essential (such as experienced crew, or training plans) should never be paid. To offer a paid service is often seen as an attack on the foundation, integrity and future of the sport. 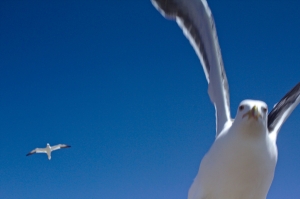 The One That Got Me!

23. Fulmars and Blackback gulls will attack you if you swim too close to their nesting area. Fulmars will vomit on you (their name means “foulness of the sea” and Blackback gulls which are quite large will strike you with their beak (two inch long gash on my scalp last year after unknowingly getting close to a Blackback nest! Pic of the one that got me is on the right).