In the last part we closed with Byron’s continued explanation of his Hellespont swim to Mr. Turner, (below again).

“With regard to the difference of the current, I perceived none; it is favourable to the swimmer on neither aide, but may be stemmed by plunging into the sea, a considerable way above the opposite point of the coast which the swimmer wishes to make, but still bearing up against it; it is strong, but if you calculate well, you may reach land. My own experience and that of others bids me pronounce the passage of Leander perfectly practicable. Any young man, in good and tolerable skill in swimming, might succeed in it from either side. I was three hours in swimming across the Tagus, which is much more hazardous, being two hours longer than the Hellespont.

You’ll have noticed Byron’s mention of the Tagus river in Portugal’s Lisbon. The famous Hellespont swim wasn’t Byron’s first. The year before, in 1809, he swam across the Tagus.

“I swim in the Tagus all across at once, and I rides on an ass or a mule, and swears Portuguese, and have got a diarrhoea and bites from the mosquitoes. But what of that? Comfort must not be expected by folks that go a pleasuring.”

(This reminds me of swimming in Cork’s River Lee, dirtier by far than swimming around Manhattan, and cause of a gasto-intestinal illness that lasted a week!).

The Tagus joins the Hellespont as two of the three of what are called Byron’s Trilogy of Swims, in Portugal, Greece and Italy.

Byron seems to have written little of it, certainly to the extent of the Hellespont swim. The swim was from Porto Brandão and finished at Belem Tower. The geographical distance is only about 1.7 kilometres. Of little consequence now, nonetheless, it’s part of the birth of the sport, and Byron was no different than of us in gradually extending his swim range based on experience. Which fact also resonates today. When someone with little or no record of marathon swimming suddenly announces their intention to swim further than those with actual experience, well, you should be asking questions. 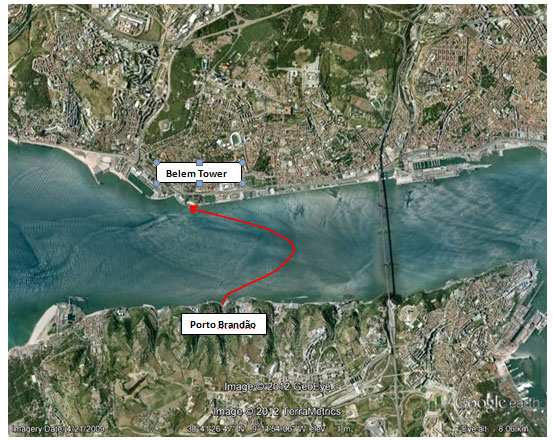 Of what may be done in swimming, I will mention one more instance. In 1818, the Chevalier Mengaldo (a gentleman of Bassano), a good swimmer, wished to swim with my friend Mr. Alexander Scott and myself. As he seemed particularly anxious on the subject, we indulged him. We all three started from the island of the Lido and swam to Venice. At the entrance of the Grand Canal, Scott and I were a good way ahead, and we saw no more of our foreign friend, which, however, was of no consequence, as there was a gondola to hold his clothes and pick him up. Scott swam on till past the Rialto, where he got out, less from fatigue than from chill, having been four hours in the water, without rest or stay, except what is to be obtained by floating on one’s back—this being the condition of our performance. I continued my course on to Santa Chiara, comprising the whole of the Grand Canal (besides the distance from the Lido), and got out where the Laguna once more opens to Fusina. I had been in the water, by my watch, without help or rest, and never touching ground or boat, four hours and twenty minutes. To this match, and during the greater part of its performance, Mr. Hoppner, the Consul-general, was witness, and it is well known to many others. Mr. Turner can easily verify the fact, if he thinks it worth while, by referring to Mr. Hoppner. The distance we could not accurately ascertain; it was of course considerable.

Later we get to Byron’s recollections, as used above in Don Juan and ties himself and his companion, the criticisms and the ancient heroic tale all together:

“I crossed the Hellespont in one hour and ten minutes only. I am now ten years older in time, and twenty in constitution, than I was when I passed the Dardanelles, and yet two years ago I was capable of swimming four hours and twenty minutes; and I am sure that I could have continued two hours longer, though I had on a pair of trowsers, an accoutrement which by no means assists the performance. My two companions were also four hours in the water. Mengaldo might be about thirty years of age; Scott about six-and-twenty.

Despite the non-existence of goggles, the stroke likely being only head-up breaststroke, (aka Granny Stroke), and wearing “trowsers“, I wondered if Mengaldo and Byron’s Tagus swim (Scott having gotten out) was the very first marathon swim. I don’t know exactly where they started or finished but a quick map check showed that Lido Island to the Grand Canal is about 3.5 kilometers, while the Grand Canal through the island is four kilometres. Even allowing that they may have swum until they could see Fusina across the lagoon, and with the most accommodating measurement the distance is still only about seven kilometres. But it’s nonetheless important in the development of the sport, not least because of the pioneering nature of the swim and the time taken. 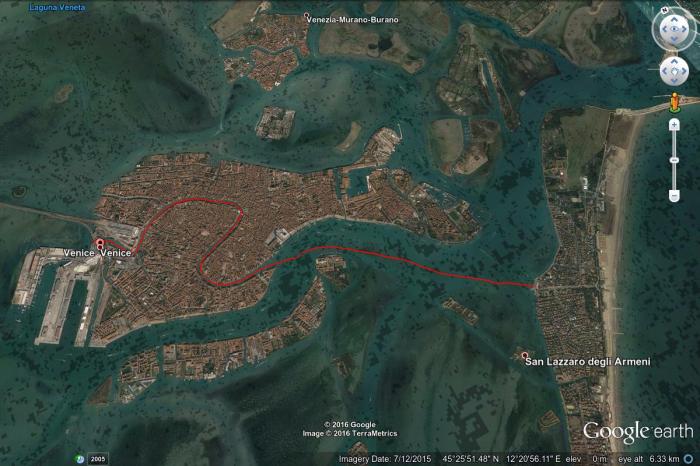 If there is anything to regret in this story, it is that those other pioneering swimmers, Ekenhead, Mengaldo and even Scott are unremembered and the swims have become Byron’s swims, though nothing in the letters indicates that Byron sought to underplay these others. It was merely that his renown as a man of letters has preserved the words so clearly, and he was only constant in the three swims, so they become Byron’s Trilogy of Swims.

In the historical context, there is the romance of long distance swimming, a romance which is mostly invisible to those of you outside and that I can’t explain, that ties Byron to an effort to connect with a story from two thousand or more years before, and hence through to today. In that he sets the precursor for modern swimmers, who often seek to emulate those who went before us, while also wishing to be our own pioneers. We are all beads on the string of this history of swimming.

“With this experience in swimming at different periods of life, not only upon the spot, but elsewhere, of various persons, what is there to make me doubt that Leander’s exploit was perfectly practicable? If three individuals did more than the passage of the Hellespont, why should he have done less? But Mr. Turner failed, and, naturally seeking a plausible reason for his failure, lays the blame on the Asiatic side of the strait. He tried to swim directly across, instead of going higher up to take the vantage: he might as well have tried to fly over Mount Athos.
“That a young Greek of the heroic times, in love, and with his limbs in full vigour, might have succeeded in such an attempt is neither wonderful nor doubtful.

Byron’s refutation of Turner’s accusation is complete, and not without a certain hauteur that I recognise and have been guilty of, that sometimes gets Channel swimmers accused of arrogance and elitism:

P.S. Mr. Turner says that the swimming from Europe to Asia was—‘the easiest part of the task.’ I doubt whether Leander found it so, as it was the return; however, he had several hours between the intervals. The argument of Mr. Turner ‘that higher up, or lower down, the strait widens so considerably that he would save little labour by his starting,’ is only good for indifferent swimmers; a man of any practice or skill will always consider the distance less than the strength of the stream.

Byron is not above twisting the knife in his opponent with a lovely barbed comment that is once again contrary to what I’d expected from the Harrow-educated lordling in a political jab that is still appropriate today.

The secret of all this is, that Mr. Turner failed, and that we succeeded; and he is consequently disappointed, and seems not unwilling to overshadow whatever little merit there might be in our success. Why did he not try the European aide? If he had succeeded there, after failing on the Asiatic, his plea would have been more graceful and gracious. Mr. Turner may find what fault he pleases with my poetry, or my politics; but I recommend him to leave aquatic reflections till he is able to swim ‘five and twenty minutes’ without being ‘exhausted,’ though I believe he is the first modern Tory who ever swam ‘against the stream’ for half the time*.”

Yes. I must admit to recognizing this sentiment, and sharing a fellow-feeling. Have I not occasionally said as much: I may not fast, elegant, pretty or young, but by good god damn, I am a channel swimmer and as such can hold my head up in any group of swimmers. Or more simply; all that counts is standing up on the far side.

I had not previously read much about Byron’s famous swim, beyond the few details commonly known by swimmers. Some people can approach such historical accounts impersonally, but I’ve tried to find a personal or emotional link to stories. I had always suspected that he would be what exactly what most Irishmen would dislike: a Harrow-educated public school aristocratic layabout who used his considerable position and wealth to treat, as many in the British Empire of the time did, the rest of Europe as a resource and playground. (In part this impression was caused by his later life and controversies and my own prejudices).

But reading his letters, his descriptions of his swims, his ability and willingness to defend those swims and the values that I believe we share of integrity and openness, and most of all, the sheer courage and physical accomplishments of his pioneering swims, leaves me with a much greater appreciation of his place at the very foundation as the father of the sport of open water swimming, and the grandfather of Channel swimming. (And you have to love someone who verbally kicks a Tory).

I have become a Byron fan, for reasons other than his poetry (and the second canto of Don Juan is really enjoyable).

Not least because, in the letters above, he finishes his tale of his swims and Leander, with what latterly has metamorphosed into the most popular joke amongst and about modern Channel swimmers and I think is my own find in all of this…

Whether he attempted it or not is another question, because he might have had a small boat to save him the trouble.

Ah yes, Byron was a ferry dodger. Who made the first marathon swimming joke.

One thought on “Rapture on the Lonely Shore, Society by the Deep Sea – The Birth of Marathon Swimming. Part 2”