This post begins a new series here on Loneswimmer.com. There are certain patterns that I’ve seen repeated over the years. There are certain experiences that recur, certain thoughts that reappear, coming anew each year. Though previously experienced, all feel fresh each time, only deepened by the growing realisation that what were once first-time or rare experiences, are part of a cycle. Recognising patterns has become like greeting old friends, the unique and individual experience of every swim that we so value heightened and not diluted by the sense of familiarity. Indeed there is an intrinsic reward for starting to recognise myself of being part of those cycles, of seeing that I am no interloper, but in some ineffable sense, that is opaque in so many other parts of life, that I am part of a web.

Why start here, in November?  In truth, chance. I planned to start in October but never got around to posting that article, though it is written. And with November drawing on to a close, I wanted to post something. Also, I like the idea that November is a time of change, one of the many delineations in the northern Atlantic ocean swimmer’s year. As humans we are creatures of time, by which I mean there is an agreed social construct to it, a common language of meaning we’ve agreed to allow us to clearly communicate. Almost none of us operate entirely free from a calendar of some kind, and being at the least aware of the simple seasonal terms and delineations leads us to believe that these are absolutes, that the idea of November is something fixed and part of the world, rather than a label of convenience on which we’ve all agreed. We step into the water though, and the idea of a fixed month with a title and characteristics becomes less tenable as something we can point to when faced with waves, cold and the changing but seemed eternal nature of the sea. But nonetheless, the fact that we can slip away from these constraints in the water, doesn’t mean that we can entirely free ourselves of them, and they retain their necessity when trying to communicate  experience.

Also, I am tickled now by the idea that I have written the first and the last in the series, with no idea what is come in the middle. So in some ways that is like a long swim, where we know how it begins, and endlessly visualise and imagine the end, and commit the important middle bit to our experience and training and willpower. Because I guess to attempt to find and show you the patterns I’ve seen, I have to trust myself now, that I have the experience and the knowledge. I just hope I have the memory, or the skill or even the hubris to ask you to accompany me on this journey over the next year.

I will forget things. I will revise and revisit and update. I will change. I will not speak for you, or any other Atlantic open water swimmer, even though my articles will often contain observations that seem absolute. There may be twelve articles,  there may be less, for the human months map not to the seasons of the wild Atlantic, but we ascribe these months to the sea and to our swimming like bookmarks or placeholders in our human need to put the ocean into a human-scale context. Our descriptions and our experiences are fleeting, foam on the surface that may or may be visible, to others, sometimes even to ourselves. 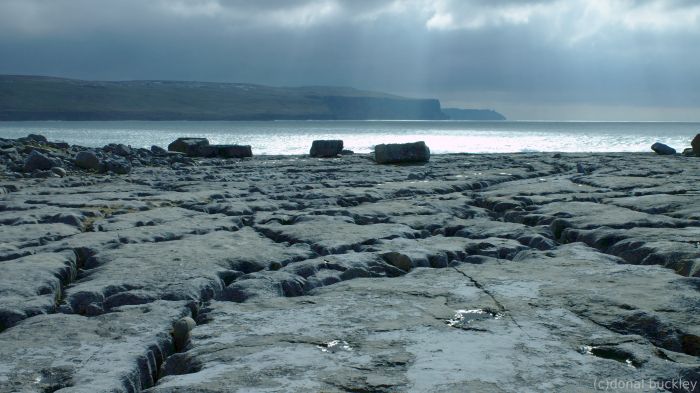 November to many swimmers is a time of ending. It is past the end of the organised open water season.  Air and water temperatures drop, air more than water. The evenings draw in, the northern latitude winter days a month before the solstice meaning drive to and from work in the dark. Frost spreads, even more rain falls.

The coast of the county of Clare in the west of Ireland is dominated by the unique landscape known as the Burren. This National Park, covering about 250 square kilometres, is often (wholly incorrectly) called Moon-like, due to the ubiquitous exposed grey limestone terraces and pavement which comprise its hills and valleys.  It has no fields, just occasional dry stone walls, whose origin is tied to Ireland’s greatest tragedy. Habitation, the small villages and solitary houses, is sparse, and what exist are there from before modern planning regulations and environmental concerns.

The limestone terraces and pavements (karst) seem at initial glance to be utterly barren (that word is not the source of the name Burren, which means Great Rock). The raised pavements (grikes) are crisscrossed by fissures and crevices (clints, the second of these two beautiful and highly specialised words every Irish schoolchild used once to learn), which are inhabited by flora from Arctic to Alpine and Mediterranean ecologies, all co-existing.

In most of the world’s Alpine and high-altitude regions pastoralists bring the cattle herds down for winter, as in most of Ireland, long past traditional pastoralism, the herds are also brought in, in part to protect the land from poaching (the destruction of the ground and flora by hungry animals, rather than the illegal hunting of wild animals). 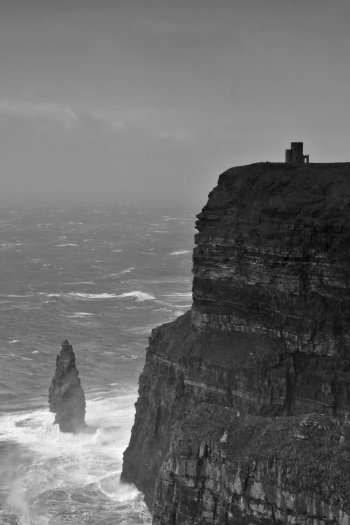 O’Brien’s Tower on the Cliffs of Moher in November

But in the Burren, on the first day of November in an old and traditional practice, cattle are put out on the seemingly desolate limestone landscape, to forage until spring of the following year. The cattle eat the opportunistic hazel saplings and humus which would otherwise fill the clints and stifle growth, and by doing so  allow the area to thrive and renew itself each year. This practice is called Winterage. Its result is a healthy symbiosis between animal and environment. And it’s a word highly applicable to open water swimming.

By the beginning of November, the rest of the world begins to ask if we open water swimmers are still swimming in the sea. Each questioner exclaims their dislike of cold, their horror at the sight and thought of the cold, cold water. For to them, standing and watching us and the sea, it still an act more of imagination rather than vision or comprehension.
But November is not what they imagine. They do not know the water. We swimmers know that the temperature is still usually from ten to eleven degrees Celsius (50 to 54F). We start the month  having not yet reached the tipping point, the cold water swimmer’s Rule of Thumb, the Combined Twenty Rule (or Combined One Hundred if you are a North American heathen who eschew the System Internationale). We end the month, due more to lower air temperatures below the Combined Twenty, but still unwillingly to concede that it might be getting a bit brisk, if there is a wind from the north, maybe, but really otherwise, stop your whinging, you can still swim for an hour.

No, November is one of our special times. We have the coast to ourselves, the awe of the rare landlubber we encounter merely adds to our own sense of invincibility.

But each autumn or winter, we make the decision or ask the question: Will I Winterage?
Will I, or should, swim open water through the winter? In Ireland the very experienced swimmer knows is question can be delayed until the very end of the new year, when the temperatures finally drop well below ten degrees. But still, November gets cold, and wet. Well, colder and wetter than the preceding months anyway.

As with many open water questions, I will not give you a definitive yes or no, but point out that this is a decision you must make for yourself, and you should do so based on your understanding of what it means for you specifically. I guess I’m tying the old Irish tradition, from a time when hated the sea, because we had no access to it, to a newer Irish tradition, the winter swimmer and our love of the sea. The two don’t really align. November only seems like it is the time we decide. All the questions and assumptions come from the non-swimmers and climax during November, when colleagues and non-swimming friends ask the same questions year after year, indeed, sometimes week after week and usually frame it as “I suppose you’re done with the swimming until next year?” and even when you reply, you often get the vague sense that they don’t really believe you, or that they write you off as somewhat touched.

There is a view that serious open water swimmers should not be doing any long swims once the water is below twelve degrees. I’d hazard that this view took root most firmly in the water and on the stone shingle of Dover Harbour and spread out from there. This view is that swimmers greatly increase the risk of physical injury by trying to do any distance training below this temperature.

The other view, the view I share, unsurprisingly, and for neither of which views do I have any hard evidence, discounts the first and instead say that swimming in cold water has bonuses and benefits that outweigh any purported risks.

But to be clear, I am not talking really about real distance training like Howard James did for his earliest and latest English Channel swim record in a single year, or Fergal Somervile did for his even colder North Channel record.

The warm water swimmers do not understand. The southern hemisphere and tropical swimmers think we are insane and dismiss our activities, saying simply they “choose” not to swim in such cold, thinking to mask their fear with bravado. The pain of each immersion, which never completely disappears even with extended experience, is not something to be feared. Bravado is meaningless for them or us in the cold grey waters of the wild north Atlantic.

In November there is the extension to habituation that the swimmer will already have learned. Getting into sixteen or fourteen degree summer water at first is a little challenging, for a couple of days. But the swimmer experiences little real difficulty and gains confidence quickly and getting in is no longer a hurdle. Keep doing that as the temperature drops, passing twelve, eleven toward ten degrees is something the regular swimmer can handle.

We  become more another  more famous image, of the edge of Burren, the Cliffs of Moher. We have to learn to be like the cliffs, and lean into the Atlantic, take it on, stand against it. Winter is coming. Here we stand. We are the antonyms of the apocryphal frog slowly boiled in water, we start with cool water, and as it drops us winter swimmers shrug it off. November is the month we begin to be cooked, the month we begin our Winterage. 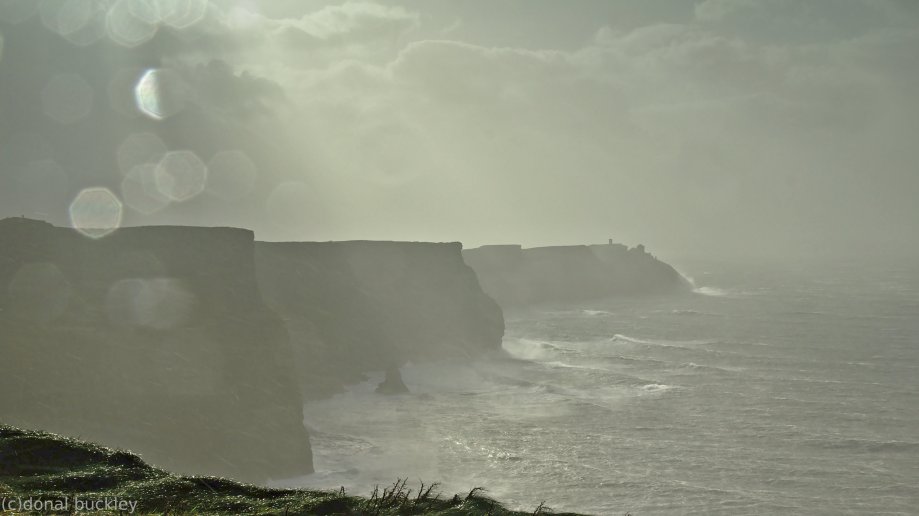